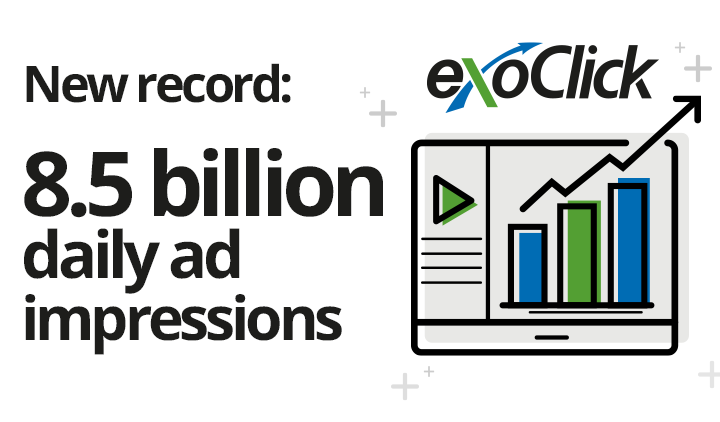 ExoClick, the innovative ad company, today announced that it has broken another record, it is now serving 8.5 billion daily ad impressions across its global ad network of publisher sites.

ExoClick’s Sales and Ad Operations Director Evan Zirdelis commented, “This year we added exclusive new traffic sources including several additional dating site members area publishers. We also saw initial increases in traffic when lockdowns began in March this year, and we have continued to maintain our high impressions after the lockdowns began to end.”

Zirdelis continued, “One of the main reasons for this growth in impressions is that we constantly strive to help our global network of 65,000 publishers optimise their websites and ad zones. We have introduced several platform features and tools this year to help publishers create additional inventory opportunities and increase their revenues. We then educated our publishers on how to use these features with tutorials and business advice through blog posts and our recent Ultimate Guides. More inventory gives more volumes for advertisers to target with their offers, which in turn creates more demand for our quality traffic sources.”

Publisher optimization features and business tips ExoClick has introduced this year include:

ExoClick’s Business Intelligence department compared network data from Q1 to Q2 and impressions increased by 13.87% with 72.5% on Mobile, 22.7% on Desktop, 4.1% on Tablet and 0.7% on SmartTV/Consoles. That’s up from 68.3% on Mobile in Q1. Members area traffic saw a bigger increase when compared to Q1 at 24%, device distribution was more or less the same with Q2 showing 63.5% on Desktop, 31.9% Mobile and Tablet 4.6%. In addition to serving 8.5 billion daily ad impressions, the company is also now averaging at 14 billion Programmatic queries per day 8.5 billion for advertisers  and 5.5 billion for publishers.