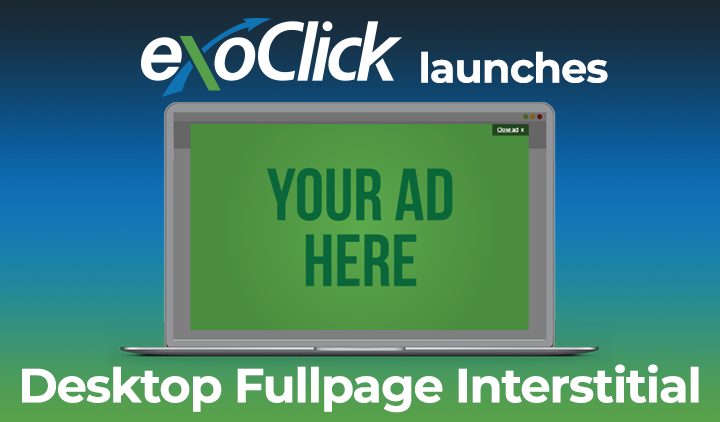 The Interstitial is a full page ad displayed on desktop horizontally 1600x900px with an image or video banner. The ad is triggered in between a page load and shown to the end user. The full screen displays the ad but still allows the very top section and sides of the publisher’s site to be seen by the end user, so that the user knows the publisher’s site is beneath the ad and they can close the ad and return to view the publisher’s content. The format is fully Google compliant because it features a ‘Close ad’ option at the top right of the ad.

Evangelos Zirdelis, ExoClick’s Sales and Ad Operations Director commented, “After a very successful testing period with the Mobile Fullpage Interstitial we have now released a desktop version. This format is a great alternative to the Popunder and we have provided different triggering options for both the Interstitial and Popunder formats so that they can be used in different configurations together, this flexibility provides new ways for publishers to monetise end users with large sized ad formats. The Interstitial is becoming a popular ad choice for publishers because it allows them to monetise their sites effectively with high CPM prices and remain compliant with Google and the Better Ads Coalition. There is high demand for this format from advertisers because of its large size enabling them to promote their offers with eye catching and compelling creatives.”

The Desktop Fullpage Interstitial is available with CPM and CPC bidding models. For more information about this ad format visit ExoClick’s Documentation and FAQ page here.