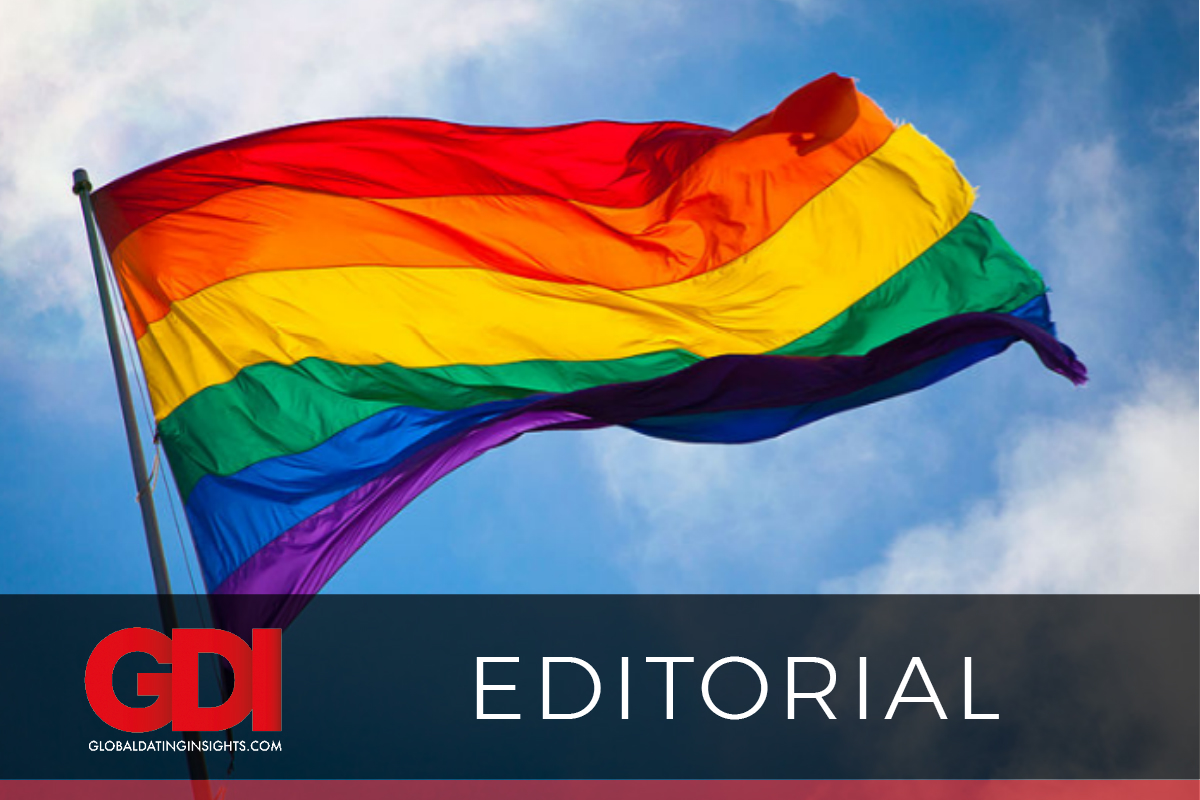 Over 70% of LGBTQ relationships start online in the USA, compared to around 20% of relationships in the general population. Gay and lesbian sites have long led the industry when it comes to engagement metrics such as this, serving as indispensable tools for connectivity in their respective (often dispersed) communities. Similarly, the LGBTQ section of the market is always among the first to trailblaze with new innovations, both online and offline, often setting trends mainstream sites proceed to follow. Grindr was arguably the first GPS-based dating app to become a global brand, for example, and the LA-based leader continues to be ahead of the curve in many ways. In this GDI Editorial, co-authored with LGBTQ dating expert Phil Henricks, we explore some of the lessons that can be learned from these niche platforms.

First, most gay brands have been incredibly proactive when it comes to health initiatives and community activism. These efforts are both intrinsically worthwhile and valuable on multiple business fronts: they increase the amount of goodwill with users and generate huge amounts of positive press coverage. Health initiatives are often HIV-related, but they may also focus on sexual or mental health in general. In addition to specific health concerns, other pertinent issues such as body shaming, sexual racism and positive self-esteem are often tackled in an effort to improve the wellbeing of users.

Regarding community activism, gay brands have been highly enthusiastic in collaborating with local organizations and support groups. Grindr For Equality works directly with health and human rights activists around the world promoting justice and safety for gays, and Scruff launched a program called Benevolads, which offers free advertising for non-profits. These apps are following the lead of some of the more established brands such as Planet Romeo – in 2009, Planet Romeo created the Planet Romeo Foundation which has funded over 160 projects worldwide.

Although this might come more naturally to brands that serve a demographic which is often discriminated against, creating a safe environment and a sense of community is something that many dating brands can benefit from.

While we have seen some blogs and digital magazines from dating brands in the mainstream space, gay brands have really excelled with both driving significant traffic to these blogs and smoothly integrating the blogs into their apps. High quality content serves as a way to keep users engaged with the app for a longer period of time, and also creates space for additional advertising revenue.

The two primary examples are Hornet’s Stories and Grindr’s INTO Magazine. As a measure of its popularity, Hornet Stories has 157,000 Facebook followers while Hornet has 123,000. Hornet Stories receives prime real estate on the in-app screen, getting 1 of 3 coveted Main Menu headings (Guys, Stories, Places), and forms a vital part of the platform’s offering. Grindr launched INTO, its digital magazine, in August of 2017 and has recorded over 25 million unique viewers so far – this beats many established LGBT blogs and media outlets.

Both Stories and INTO cover an electric mix of content across travel, fashion, global politics and cultural / entertainment news, and both have opened up prime banner ad real estate on their respective sites. Many gay brands have borrowed the News Feed functionality generally associated with social media platforms. The News Feed increases engagement and a sense of community, and offers users different options for ‘breaking the ice’ aside from directly initiating a conversation (users can like or comment on a photo, etc.). This functionality, moreover, is something nearly all users are comfortable and familiar with due to its ubiquity in social media. In addition, the News Feed also offers additional spots for advertising as well as creating unique content from advertisers. Brands to have introduced this feature include Hornet, Recon, Moovz and Mister X.

Scruff has upped the ante with their Scruff Venture initiative, which was covered in the New York Times Travel section when it launched. Users on the app can set up trips and make contact with locals prior to travelling to a destination. In addition, users who have Airbnb or VRBOs can include links to those on the app. Scruff views this feature as way to broaden the possibilities for its use and appeal to a larger demographic of men.

Nearly all of the popular gay and lesbian brands have utilised social media platforms to help generate visibility and brand recognition. Despite the well-known hurdles that Facebook presents to dating apps and sites, the majority of platforms have made social media an integral part of their overall marketing strategy.

Most brands have a few hundred thousand followers and make use of social media for a variety of reasons including: featuring members, contests that drive usage and engagement, UI updates, pricing specials and promotions, and offering an additional outlet to advertisers and marketing partners. Although social media can be challenging with the consistent algorithm changes, it still remains a solid outlet for increasing visibility and creating branding initiatives.

“The LGBTQ section of the market is always among the first to trailblaze with new innovations.”

Further to these four avenues for growth, the LGBTQ dating space may also be instructive when it comes to navigating gender and diversity politics in the mainstream. April’s GDI Editorial examined some of the conundrums heterosexual platforms face as they push for inclusivity, such as how best to integrate transgender folk in male/female search functions. Grindr has again taken steps to help users express themselves and their identities, and has added a gender identity FAQ to its website.

Heterosexual and mainstream sites can no doubt benefit from keeping a close eye on the niche, watching for the standout strategies, and assessing which ideas can translate onto their platforms. Tinder has already adopted a newsfeed, and location-based search is now the norm in the industry. As different sites break off into video streaming, offline events, online journalism and deeper matching algorithms, several new insights will be able to be gleaned from the LGBTQ successes and failures.

The above article was co-authored by LGBTQ dating expert Phil Henricks and Global Dating Insights Editor Scott Harvey. Phil is a branding and marketing executive with over 12 years’ experience in the online dating industry.