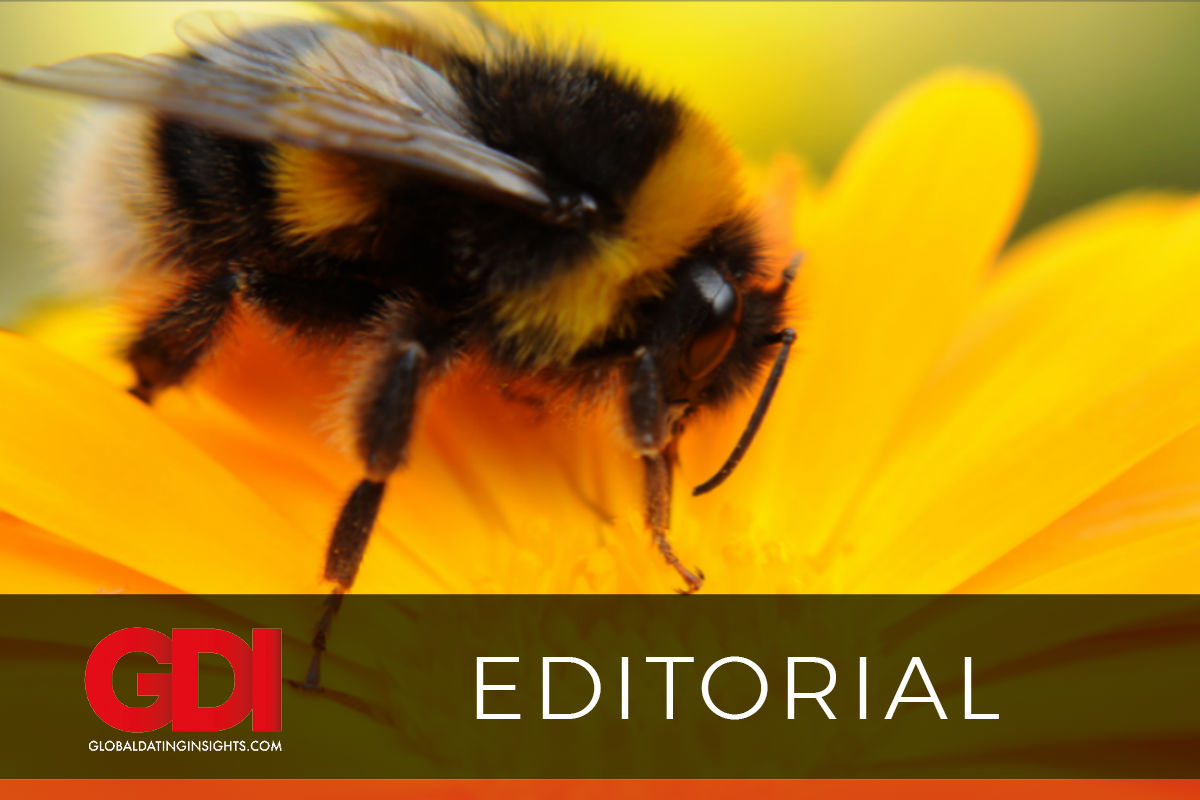 Bumble’s female-first credentials are clear: it’s the feminist app that puts women in charge of dating. In allowing them to send the initial text, it ensures they never have to speak to someone they aren’t 100% comfortable approaching themselves. The user base is enamoured of Serena Williams, Kate McKinnon and Wonder Woman, and the founder feels that “(…) a lot of the dysfunction around dating has to do with men having the control”. The platform is quick to remove those men who behave rudely towards women, as well as those with a history that suggests they may be unsuitable as suitors.

The entire brand is built upon this progressive foundation – even Wolfe Herd’s controversial departure from Tinder forms part of the narrative. Bumble’s ‘Hive’ events host speakers who focus on female empowerment, while the office in Austin is kitted out with breastfeeding facilities (plus “blowouts, hair trims, and manicures every other week”). The high investment in on-message marketing seems to have been a success, allowing for a fairly seamless diversification into networking and effectively engaging women on US college campuses.

Bumble benefits from the ladies’ night model formerly employed by nightclubs. Once it has attracted enough women through targeted ad spending, men will follow and pay for access if necessary. Men who are cognisant of Bumble’s guidelines and public shamings will behave when online, looking to charm their matches and represent themselves honestly for fear of reprimand. At a glance, the incentives are set up perfectly for female-centric dating. Look more closely, however, and Bumble can also be thought of as a brilliantly efficient service for men.

Consider the trope that Tinder is causing a dating ‘apocalypse’. The “swipeable smorgasbord of human flesh has its limits”, as The Times puts it. While the Match Group flagship is as popular as ever, and is enjoying a particularly purple patch following the introduction of Tinder Gold, many users feel jaded by the sheer number of profiles, matches and opening lines that characterise time spent on the app. Frustrations on the male side stem from the ratio of rejection to success: a user (“Dave”) may have to swipe through 50 profiles to get a match, and may only want to speak to one in three matches.

Say the same user starts fifteen conversations – he may be lucky to get five replies. Of those replies, perhaps one leads to a flowing conversation. Suppose five flowing conversations are needed per date. This would mean Dave swiped through 11,250 photos before meeting someone in person. Say only one in five dates goes well enough for a second – that’s close to 60,000 profiles. It’s clear that any user could become exhausted by such a process, yet the intuitive appeal of the swipe-based interface keeps engagement high.

The inefficiency has an indirect impact on user conduct. Matching with a girl, the male user is aware of the fact that his opening line will have to be the wittiest, edgiest or most chivalrous of 15 to receive a response. This is where brazen attempts at humour and smut often miss the mark, making male introductions seem coarse and Tinder misogynistic. Females, their profiles bombarded with tried-and-tested approaches, recoil and select only a few to engage with. The men who end up ignored are forced to try harder, and the women begin to feel harassed by evermore enthusiastic messages.

Bumble differentiates itself by intervening at the start of conversations. All else being held equal, and working from the assumption that men ignore women less than women ignore men, this twist has a dramatic effect on in-app behaviour. 50 swipes for a match, one in three matches starts a conversation, one in five conversations flows, one in five flowing conversations leads to a date. That’s 3,750 swipes per date, a threefold improvement. Plus, there is no swipe limit on Bumble, whereas there is one on Tinder – non-paying men on the former can hit their lower target in a proportionally shorter amount of time.

Moreover, male users now have matches that self-select. They no longer have to peacock and compete for attention, nor are they likely to be ignored (as they are already playing the part of the recipient). Any females who are not interested in them disappear automatically after 24 hours – men simply have to swipe right and wait for promising conversations to start. The streamlining of their experience comes as a total net positive. There is a danger that they will struggle to find a match, but this drawback does not sap energy in the same way as mass first message rejection.

What of the female experience? Women see a marked decrease in the amount of lazy, presumptuous behaviour from men on Bumble, because the coding is such that it becomes difficult for those who would spread bet their way to a meetup (“DTF?”). Not having to sift through dozens of these messages is no doubt welcome. A disheartening ‘ghost’ from a match is no doubt preferable to feeling unsafe because another being too pushy. Combine this with the unflagging adulation they receive from brand ambassadors, and Bumble becomes a hub of empowerment for capable singles to gravitate towards.

That being said, women moving from Tinder to Bumble encounter the limitations of having control as well as the benefits. Repositories of Bumble opening lines suggest women are now having to compete for attention in the same way as their male counterparts on Tinder. There is no automatic filtering of their matches into the genuinely interested – they now have to reach out and risk rejection. Bumble has begun algorithmically punishing those men who don’t respond, as it recognises that the control alone doesn’t make dating easy and enjoyable.

“Men simply have to swipe right and wait for promising conversations to start. The streamlining of their experience comes as a total net positive.”

The app appears to be grappling with the ongoing effects of an interesting social experiment. Groups of women invariably tell surveys they prefer to be approached, so forcing the opposite to occur is a gamble. Psychology Today explains: “Men generally have done the asking for a first date, while women have generally given proceptive signals of interest or receptivity to such a request.  If a woman accepts a first date, men have been expected to make additional first time risky relationship and sexual initiatives as their relationship develops”. With women as the risk-takers, several new (and potentially unforseen) dynamics emerge.

The role reversal helps men get rejected less and helps women reject less, and both are significant. For women, however, Bumble is a mixed bag. The new powers create new responsibilities, not all of them intuitively beneficial. It is the men on the app who get the best deal – the most challenging aspects of Tinder are removed, and almost all of their interactions can lead to a positive outcome. Wolfe Herd seems to be silent on this apparent advantage – an unintended consequence, or clever marketing?

The Tinder rivalry looks set to enter a new era now Match Group has announced female users will be able to toggle women-first messaging on or off. In a deft move, CEO Mary Ginsberg has promoted the feature by highlighting the fact “women don’t always want to be forced” into being the independent, active pursuant. Giving Tinder users the freedom of both worlds will force Bumble to adapt, perhaps by reaching out to its male users and showing them benefits that already exist.