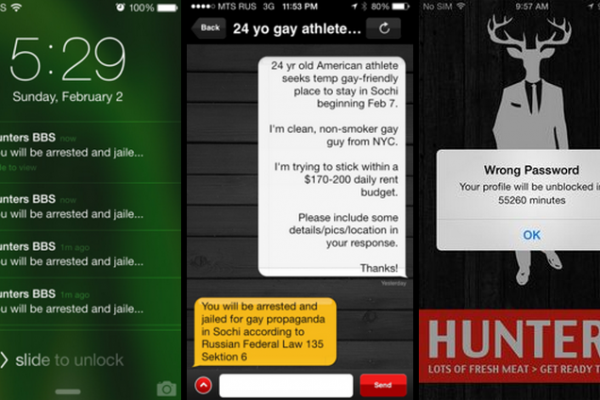 A great Buzzfeed article looks at the security of hook-up apps, following the claims by a Russian gay app that it was hacked and blocked before the Olympics.

Last Monday the CEO of Hunters, Dmitry Tsyvinski, said on Facebook that the app had been hacked, with the following message being displayed to all users:

Tsyvinski claimed that a cyber attack had deleted the profiles of 72,000 users and blocked the app in Sochi, just days before the opening of the Winter Olympics.

We decided not to report this story, as there were a few aspects of the story which seemed strange, such as the message being written in English.

J. Lester Feder references some of these worries in his article, and also asked specialists to evaluate the security of the app, finding: “whether it was a hoax or not, it was clear that users were taking a serious risk by trusting the application with their data.”

He goes on to look at the dangers of hook-up apps having lax security, especially for those using LGBT apps in societies like Russia.

He references an interview Buzzfeed did in November 2013 with Grindr CEO Joel Simkhai, who said: “Quite frankly, a lot of the [data] goes through WiFi networks and cellular networks – we can’t control those […] this is the post-NSA age where we would now realize that everything is very much available, particularly to government.”

Poor security can be a huge danger for users of such apps, as they could be used by governments and hate groups to entrap gay men.

Lester gives the example of a Russian group, Occupy Paedophilia, who used social networks to lure gay men somewhere, then kidnapped and humiliated them in videos posted online.

The article advises using virtual private networks (VPNs), or to use apps on a computer through a program that emulates a cell phone, which keeps your number secure.

“All you need is [a] government that takes the issue seriously and wants to track down queers, or you need blackmailers with some level of technological skills … [these apps] will get hacked, it’s inevitable.

“The problem is that users really do feel safe.”