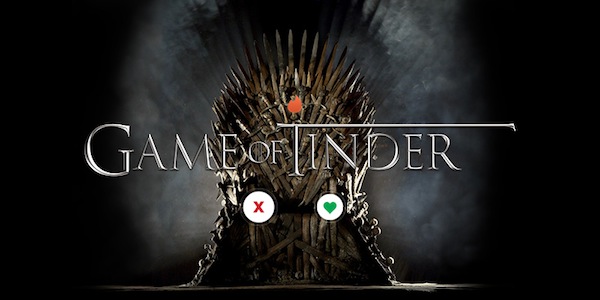 PopSugar Entertainment recently interviewed the cast of Game of Thrones at the Season 5 premiere, to ask which of their fellow characters they would match with on Tinder.

Sophie Turner, who plays Sansa Stark, said she would swipe right to almost anyone on the show — including Petyr ‘Littlefinger’ Baelish and Podrick Payne.

Maisie Williams (Arya Stark) said that she would swipe right for Littlefinger, as well as Jamie Lannister because “he looks like a real Prince Charming.”

Emilia Clark, who plays dragon-mother Daenerys Targaryen in the HBO show, swiped left for Littlefinger and his dodgy accent, but right for Jon Snow (“He’s so pretty!”), Tyrion Lannister and Brienne of Tarth.

We also get the dating preferences of Davos the Onion knight, Brienne of Tarth, and Samwell Tarly’s loyal beau, Gilly.

Watch the rest of the hilarious interview below, but look out for potential spoilers in the comments!