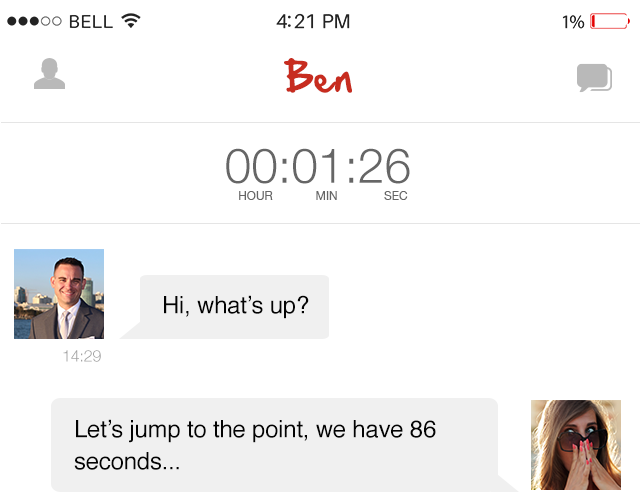 Israeli app Hashsnap has just launched a revolutionary way for singles to avoid endless messaging and express their true feelings.

The new feature encourages users to cut to the chase, because they only have a limited time to chat.

Called Low Chattery, the new method of matching will only work when a user’s phone battery is about to die.

Hashsnap, which recently launched on two US campuses, said the idea is all about “being yourself and living in the moment”.

“Wouldn’t it be easier to live in the moment if you only had 1% of your life left? Now, Hashsnap brings that same experience to your dating life vicariously through your phone’s battery.

“Next time your phone is about to die, throw away your charger and open up Hashsnap instead. It may sound crazy, or even a bit irresponsible, but it’s the only way to participate in Hashsnap’s new matching system feature called Low Chattery.”

When users have 1% battery on their phone, the new feature connects you with another Hashsnap member whose phone is also about to die, to share some “last words”.

However they really are last words, because if users try to charge their phone, the connection is ended.

Hashsnap has already put the feature into a beta test on university campuses, and received some positive feedback from users:

One ASU student, 19-year-old Jenny Crawford, said: “I love Low Chattery because I never enjoyed those long text conversations that lasted for days or weeks without going anywhere. There’s no time for silly games on Low Chattery. I exchanged phone numbers with 2 people after using it for the first time. This one seems like a winner.”

Hashsnap recently launched at University of Arizona and Arizona State University, and will soon expand to other colleges across the US.

Find out more about their unique take on online dating here.