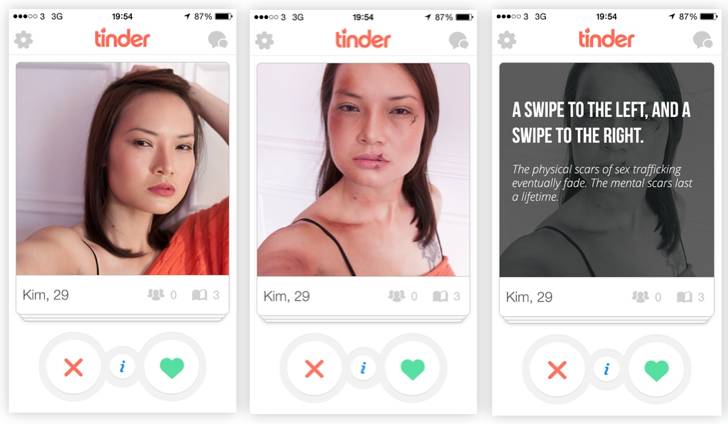 Tinder has been used to raise awareness amongst men about sex trafficking in Ireland.

On behalf of the Immigration Council of Ireland, marketing agency eightytwenty have added profiles of women to the dating app, each photo swipe illustrating the physical impact of sex trafficking.

By telling the shocking stories of women they hope to raise awareness of its prevalence in Ireland, and enlighten men who pay for sex to its harm.

The Immigrant Council of Ireland said that behind drug smuggling and gun running, sex trafficking is one of the most lucrative criminal activities. Cathal Gillen of eightytwenty said the popularity of Tinder in Ireland gives them a “unique, innovative and stand out way of communicating to men the issues faced by women involved in sex trafficking.”

The marketing agency have included a “large number” of such profiles on the app across Ireland, which links to the site turnofftheredlight.ie.

“As a frontline agency, we have supported 60 women who were brought here to be sexually exploited while Senior GardaÃ­ confirm that Irish prostitution is run by foreign and domestic criminal gangs in a trade thought to net over €200m a year. It is important that men of all ages who buy sex are made aware of the consequences of their actions.”