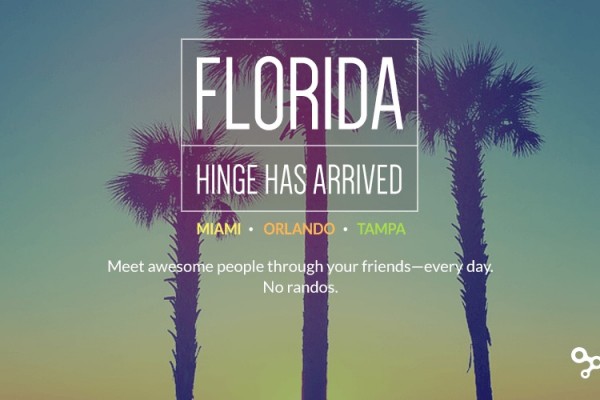 Hinge has continued its expansion across the U.S., launching in Florida.

The app has emerged as one of the leading post-Tinder dating apps, offering a more relationship-centric experience for singles.

Hinge connect users via Facebook and sends you tailored matches from friends of friends.

These matches are based on “social proximity” information from Facebook.

The app also lets you see where your matches work, and where they went to school.

And now Hinge is expanding to Florida, launching in Miami, Orlando and Tampa.

Hinge’s marketing director, Karen Fein, said: “More people have signed-up to be notified about Hinge coming to Florida than in any other markets.

“Further, after surveying Floridians to better understand the dating scene, we learned that 93% of them would prefer to meet someone new through friends.”

The New York-based app is now live in 16 cities across the US.

Earlier this month, they were one of the 11 brands that Uber launched their API with, letting you book cars from within their chat feature.