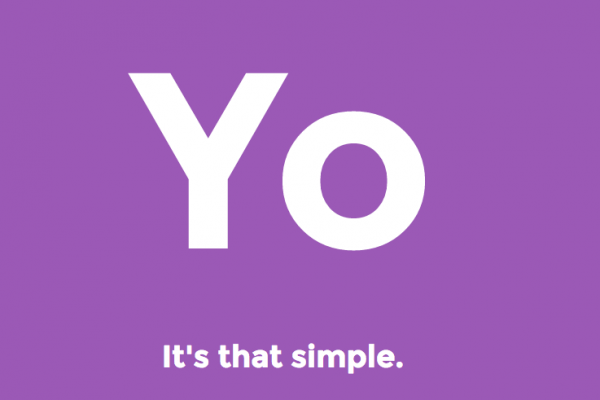 Yo is a new app with one simple feature – sending push notifications that say “Yo”.

Since its launch in April, the app has amassed over 1m users, and around 2m messages are sent every day.

It has also received investment of $2.5m – its main investor being the CEO & founder of image-sharing app Mobli, Moshe Hogeg.

Yo was recently valued between $5m and $10m.

Despite its surface simplicity, the app’s founder, Or Abel, told The New York Times that the app is misunderstood:

“People think it’s just an app that says ‘Yo’. But it’s really not.

“We like to call it context-based messaging. You understand by the context what is being said.”

For example during the World Cup, if you sent a Yo to the username worldcup, you would receive one back every time a goal was scored.

Yo have also released an API, so developers can harness the app for their own means – whether a retail store alerting users to a sale, or a band announcing a gig.

The Israeli-based app recently held its own hackathon – allowing developers to come up with new implementations for the app.

Examples of these are people being Yo’d when their table at a restaurant is ready, bookmarking songs from the radio or weather alerts.

Others looked into the internet of things – connecting smart objects via an internet connection.

The ‘Yoaster’ would let the user know when their toast is ready, with a Yo.

In more concrete plans, the Israel startup are expanding to make the app more useful by combining it with other internet services.

As investor John Borthwick, CEO of Betaworks, said on his blog:

“We are fascinated by these uses of simple yes/no on/off communications tools.  There is no payload in Yo – no pictures, no text, just a deceptively simple on/off state that over time has the potential to become a platform.

“As the notification layer becomes the primary interface of alert-based information on your phone – as the OS’s allow navigation and controls in those alerts – there will emerge a new class of applications that mediate this layer for web sites, other apps and connected hardware.”

Yo is available on iOS, Android and Windows.