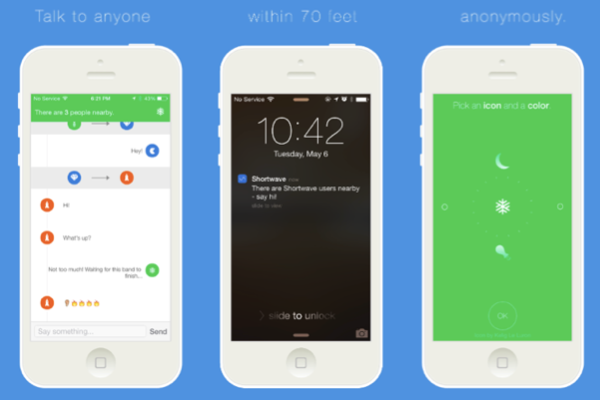 With the tagline “Talk to anyone within 70 feet, anonymously”, Shortwave uses the same technology as Apple’s retail-focused iBeacons, connecting users with their iPhone’s bluetooth signal.

You simply download the app, choose a personalised logo and screen colour, and it scans for other users.

Shortwave’s founder, Alonso Holmes, said he imagined it being used in situations such as concerts, but told TechCrunch he was aware of the dangers of its anonymous nature.

“Our goal was to build something useful for concerts, conferences, and the like — but if we’ve learned anything from comments on the web, it’s that some people feel empowered by anonymity and use it for evil.

“We’re kind of in unproven territory here — our hope is that being near the people you’re talking to will keep the conversation civil.”

Holmes said that some features of Shortwave – such as identifying users by their colour screen – were aimed at trying to prevent user bullying.

“If you’re in the same room as someone and you happen to see a flash of color on their phone, you know who that person is on Shortwave.

“So we’ve built-in a few subtle features to push people in the direction of civility, but ultimately it’s up to the users.”

Holmes said if problems arise, they might introduce a community-based moderation feature, such as negative voting for offensive behaviour.

Shortwave uses the same technology as Mingleton, a hyper-local Tinder that connects you with singles in your immediate vicinity.

Another app using bluetooth for messaging purposes is FireChat, which lets you send messages without any internet connection or phone signal.

FireChat utilises Apple’s Multipeer Connectivity Framework to connect phones using their bluetooth signals, creating a mesh network with the phones as nodes, meaning the more devices that connect — the larger the network.

Ryan Bradley of Fortune called this technology “quite possibly the most important thing to happen to the Internet since international network hubs began to form in 1995.”

FireChat is an open and anonymous chatroom, and this week they introduced a new feature which lets you open group discussions.