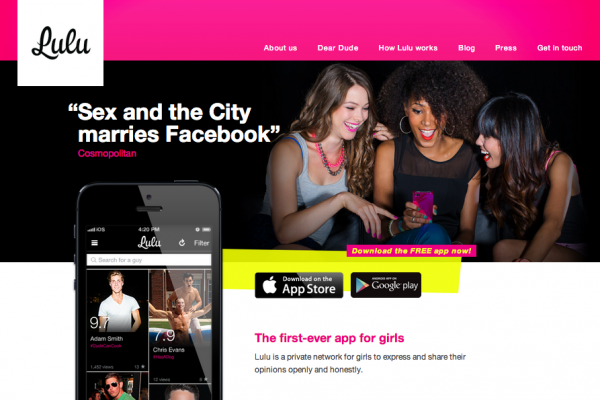 The male-rating app Lulu has decided to allow men to sign up and control what information is published about them.

Lulu originally started as a women-only app, a place where women could share information and rate men they knew.

Founders Alison Schwartz and Alexandra Chong said: “We created Lulu to unleash the value of girl talk and to empower girls to make smarter decisions on topics ranging from relationships to beauty and health”.

It then allows women to rate men by answering a series of questions and evaluating their character, appearance and sexual performance using fixed hashtags.

According to the website, these ratings aim at helping women “to share their experiences and make smarter decisions – starting with relationships”.

The earlier version of Lulu offended some men who felt that their privacy was violated.

For example, Lulu was sued last December by a Brazilian man for using his Facebook profile without his permission, and for damaging his reputation by publishing demeaning comments about him.

There was also a Change.org petition which tried to ban the app for being a “clear violation of men’s privacy.”

Lulu founders have responded to this negative criticism, and launched some important changes to protect men.

From now on, men have to sign up to be rated and they also have access to the ratings.

Men are also allowed to publish content like pictures to attract more profile views and they can get off Lulu whenever they want.

Lulu said in a statement: “Some guys don’t want to be on Lulu, and we respect that.

“We’ve decided to be the better woman and only have guys on Lulu who are open to feedback.”

Although this move appeases critics of the app, as many have commented, it also removes the unique selling point of the service, and the main reason for its popularity.