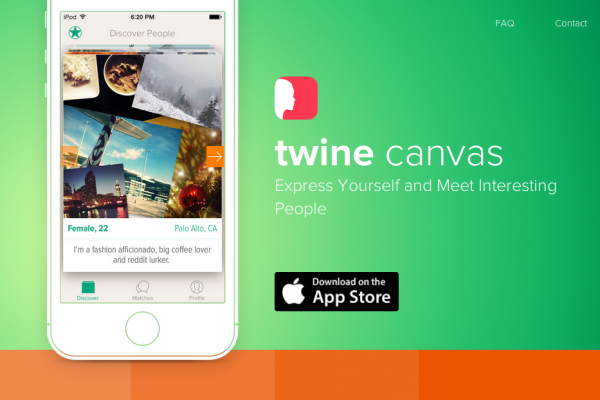 Twine matches users by interest, setting up a chat and only displaying a user’s profile picture when they want to reveal it.

Although Twine is still available as a separate app, Twine Canvas has taken over its website and Twitter feed, and seems to be the main focus of attention.

Their website makes reference to this new direction, saying: “We built Canvas because we realized that a static list of interests doesn’t always do a good job of expressing who you are.”

Twine Canvas has kept the same “personality first” stance as Twine, but has a different functionality – now working like a cross between Tinder and Instagram.

Users now upload a personality canvas – photos that express their interests – which users like, and if users mutually like each other’s canvas, they are put in touch.

When they are connected, name, profile and photos are revealed.

Rohit Singal, founder and CEO of Sourcebits said: “When someone creates their canvas of likes, hobbies and experiences, it’s far more insightful than a shallow selfie or an impersonal stat.

“Twine Canvas addresses the “boring matches” problem of other dating apps by focusing on personality first.

“Inspired by the visual self expression of Instagram, Pinterest, Whisper and Tumblr, we allow people a new level of personal creativity to meet interesting matches.”

Sourcebits is a developer of mobile apps who have worked for Coca-Cola, Hershey’s and IBM, who raised $10 million from Sequoia and IDG in 2011 to develop products that include Twine and Twine Canvas.

Visit the Twine Canvas site here, where you can download the app.