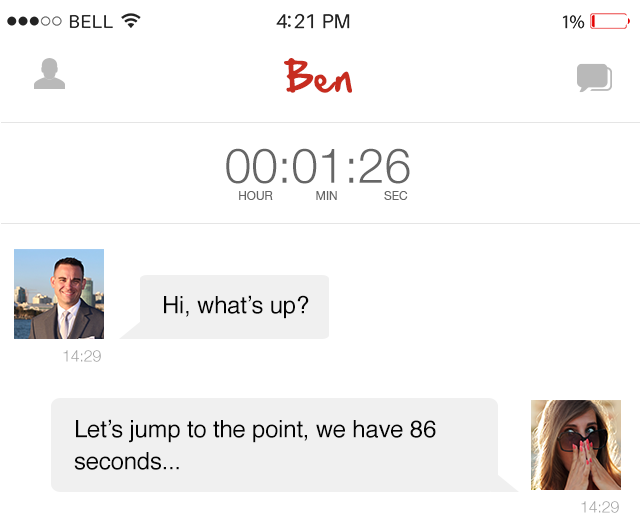 Yesterday we posted about a new feature from dating app Hashsnap called Low Chattery, which matched up users when they had 1% battery on their phone.

As some of you may have guessed, the story was a collaborative April Fools’ joke, however Hashsnap contacted us saying they got lots of feedback from users, as their Twitter and Facebook went crazy with people interested in the new feature:

Yesterday our team got tons of inquires about the new Low Chattery feature that matches users who only have 1% battery left. Some users even took the idea very far:

Daniel, 26 wrote us: “Low-chattery is a brilliant idea but it has a serious flaw – my nexus 4 doesn’t allow my phone to stay on with 1%, nor would 1% with my lame battery give me even close to 1:30 minutes of usage.”

Ashely, 29 wrote us: “Hashsnap, I timed how long my phone stays alive with 1% battery while chatting and it’s over 4 minutes! It’s an awesome idea. Please release it asap.”

Daniel and Ashley, we appreciate it a lot. We will send you a T-shirt instead of the new feature. 🙂

Although it seems like a very entertaining idea, we won’t be launching this feature.

We are currently working on a huge version update that will be available in a week!

Check out the original article below:

Israeli app Hashsnap has just launched a revolutionary way for singles to avoid endless messaging and express their true feelings.

The new feature encourages users to cut to the chase, because they only have a limited time to chat.

Called Low Chattery, the new method of matching will only work when a user’s phone battery is about to die.

Hashsnap, which recently launched on two US campuses, said the idea is all about “being yourself and living in the moment”.

“Wouldn’t it be easier to live in the moment if you only had 1% of your life left? Now, Hashsnap brings that same experience to your dating life vicariously through your phone’s battery.

“Next time your phone is about to die, throw away your charger and open up Hashsnap instead. It may sound crazy, or even a bit irresponsible, but it’s the only way to participate in Hashsnap’s new matching system feature called Low Chattery.”

When users have 1% battery on their phone, the new feature connects you with another Hashsnap member whose phone is also about to die, to share some “last words”.

However they really are last words, because if users try to charge their phone, the connection is ended.

Hashsnap has already put the feature into a beta test on university campuses, and received some positive feedback from users:

One ASU student, 19-year-old Jenny Crawford, said: “I love Low Chattery because I never enjoyed those long text conversations that lasted for days or weeks without going anywhere. There’s no time for silly games on Low Chattery. I exchanged phone numbers with 2 people after using it for the first time. This one seems like a winner.”

Hashsnap recently launched at University of Arizona and Arizona State University, and will soon expand to other colleges across the US.

Find out more about their unique take on online dating here.