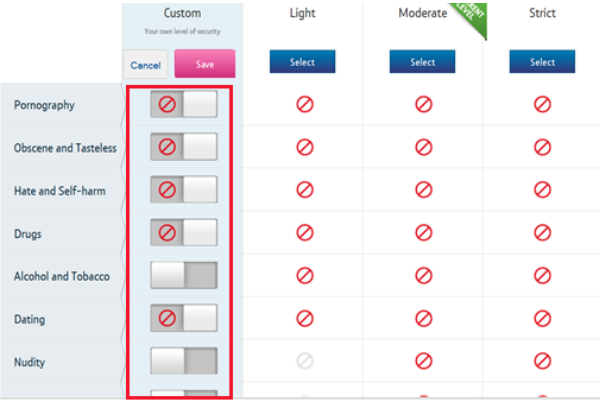 David Cameron says he will find a way to keep UK internet filters, after new EU legislation said the filters were illegal and should be removed.

In 2013, the UK government ruled that all ISPs must ask their users to make an “unavoidable choice” whether to activate parental internet filters.

Most of the ISPs gave users a variation on three choices — light, moderate and strict.

As we wrote last year, in many of these filter bands, dating was automatically blocked, sitting alongside categories like “Pornography”, “Weapons and Violence”, “Phishing and Malware” and “Drugs”.

Interestingly, an Ofcom report last year said the filters were roundly rejected by the UK public, with an average of 13% turning the filters on.

However the EU has now ruled that such filters are illegal under new net neutrality laws, passed on the 27th October.

The EU voted in legislation that said ISPs must treat all online traffic “without discrimination”.

But Cameron has defended the internet filters in the House of Commons during Prime Minister’s Questions, saying that the law will not change, and the government will find a way around the new EU law.

The PM said: “I spluttered over my cornflakes when I read my Daily Mail this morning, because we worked so hard to put in place these filters, but I can reassure that we secured an opt-out yesterday so we can keep our family friendly filters to protect children.

“I can tell the house that we will legislate to put our agreement with internet companies on this issue into the law of the land so our children will be protected.”

These new EU laws will come into effect at the end of the year, and say that internet traffic must be treated “equally, without discrimination, restriction or interference”, regardless of the “content accessed or distributed.”

But the government told the Daily Mail that “nothing will change”, saying: “This means that if we need to, we will bring in our own domestic law to retain the existing filtering systems the ISPs have put in place.”