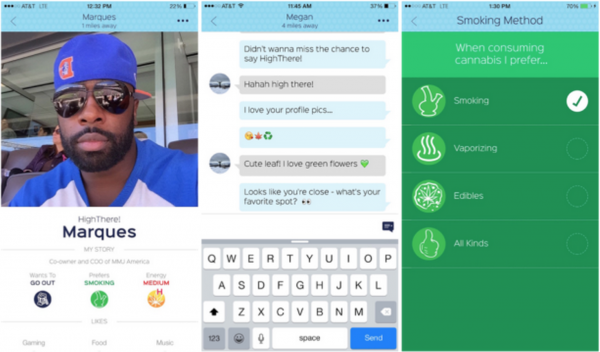 High There!, a dating app designed exclusively for people who smoke marijuana, has added an innovative new feature with its latest update. Also added to the new build is a video profiling feature, which allows users to create video profiles that can then be viewed by others on the app.

The feature has been added to enable its users to provide others with a brief one statement video profile, encouraging them to “show who you are”.

High There! is confident that its latest update will help to ease the stigma attached to marijuana culture as a whole, “by giving you the coolest way to connect with each other anywhere”, said High There! CEO and co-founder Todd Mitchem.

The app, dubbed “Tinder for marijuana users” requires users to choose to tap “Hi There” or “Bye There” for the profiles of other users, and will be matched based on mutual interest.

You can also detail what your energy levels are like when you get high, the activities you enjoy most (like food, gaming, culture), whether you like going out or staying in, and if you prefer to vape or smoke.

It was originally released exclusively in the United States, and notched up 41,000 downloads in its first six weeks.

Back in March, High There! said the app was growing by over 2,000 users a day.

Following this, the team scored a huge win when Apple and Google gave their blessings to let the app go live globally, rather than just the 23 states where weed is legal for medical purposes. On its official blog, CTO Mitch Lane said: “We are not a typical company, and our users, are not typical users.  They are like us — they are driven, dedicated, outspoken — and yes — they like cannabis too.  To meet their needs and their feedback, we really needed to start with something fresh, something green.

“As such, we re-built the app in almost every way; new graphics, new language, new features and performance.  We wanted this version to stand up and represent our culture, as we believe it to be — smart, sexy, and sticky-icky.”

And in addition to unveiling the new version, CEO Mitchem also gave a rallying call to the benefits of weed in the workplace, and how it has helped the team fulfil its latest milestone, saying: “I am here to tell you that cannabis at our office not only does not crush motivation, but, as only you would understand, it helps to inspire it.

“Our weekly smoke sesh helps to stop our brains from over thinking and serves to open our minds to better solutions, and better teamwork. I see the positive impact cannabis has on our team, our product, and the world around us. Weed has enhanced my life is so many positive ways, but none more profound than the family it has created at our High There! company.”

High There! is currently available to download on iOS and Android devices.

Watch the development of the new version here: