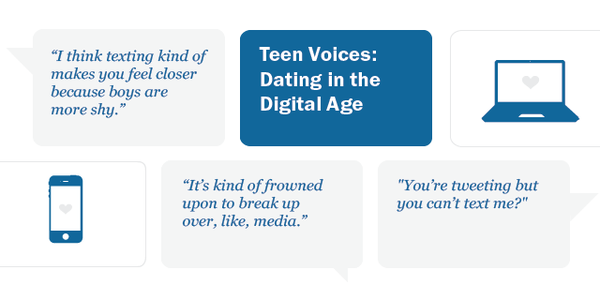 Technology is fast becoming the primary means of communication between teenagers, so it is no surprise that most young adults use their mobile devices to interact with potential or existing love interests.

A new report by Pew Research Center has sought to understand just how reliant teens are on technology to further romantic relationships, and has revealed some very interesting results.

One of the survey’s main findings was that regardless of the vast number of social media platforms out there today, just 8% of all American teenagers have actually met a “romantic partner” online.

Of those teens that answered “yes” to meeting a partner on social media sites, the majority of them met through Facebook. Yet while this figure appears to be rather low, the study found that social media platforms are “top venues” for flirtatious messaging amongst teens either in relationships or pursuing love interests.

Amongst the teens surveyed, 55% have flirted or talked to someone in person to let them know they are interested, with 50% letting another person know they were interested in them romantically by friending them on a social media site.

In addition to this, Pew Research Center concluded that girls are more likely to fall victim to social media flirtation that makes them feel uncomfortable.

This is double the 16% of boys who have taken this course of action after experiencing this. According to the research, social media sites provide the ideal platform for teenagers to publicise their feelings for their significant others – over a third of teens with relationship experience have used social media to tell their partner how much they like them.

However, a further 69% of teen social media users with dating experience agreed that social media sites allow too many people to view what’s happening in their relationship.