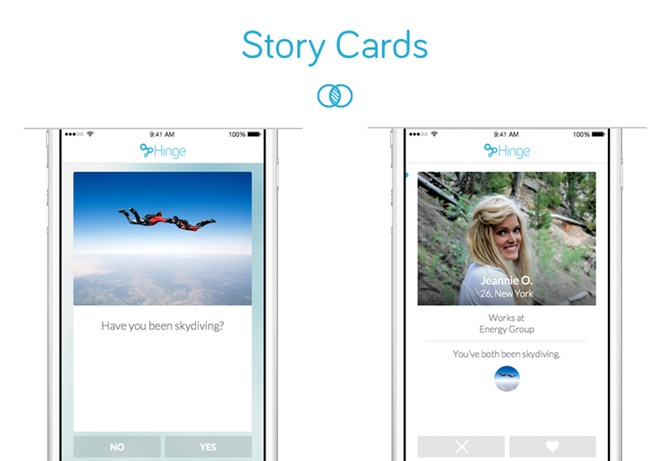 Relationship-focused dating app Hinge has just introduced a new way for its users to connect and bond over common interests and experiences.

Story Cards is Hinge’s new way of igniting conversation, by letting you answer yes or no to “life experience” questions.

After you’ve browsed through Hinge’s selection of dating profiles, a card will appear that looks like a profile, but poses a question such as “Been to SXSW?”

Singles can then choose to answer yes or no to the question, and another question will pop up asking something else, like “Have you been sailing?”.

The purpose of this is that when you do match with a user who also answered yes to one of these questions, you will both be notified by the app, so the shared experience can act as an icebreaker. Hinge said the cards are designed to be an alternative to the “tedious survey and personality tests” of the past, and aim to “show you that unique thing you have in common with your match before you even start a conversation”.

Speaking about the new feature, which was released in December, the founder & CEO of Hinge, Justin McLeod, said: “Everyone has started to look the same on dating apps. It’s hard to create a real connection based on generic profiles.

“We believe great relationships start with finding common ground; whether it’s a mutual friend, an amazing trip or even an embarrassing memory. With Story Cards, Hinge surfaces life events that allow users to connect more deeply.” McLeod also revealed that during the beta test of Story Cards, they saw a 20% increase in two-way messages between users, as well as more phone numbers exchanged.

Hinge’s founder said users generally answered around 120 questions in the first week, and the company plans to continually update and add more questions, which could also be timely, for example asking: “Have you see Star Wars: The Force Awakens?”

And after collecting some data from the answers received, Hinge also revealed the experiences people were most, and least, likely to connect and bond over:

People are most likely to bond over

People are least likely to bond over