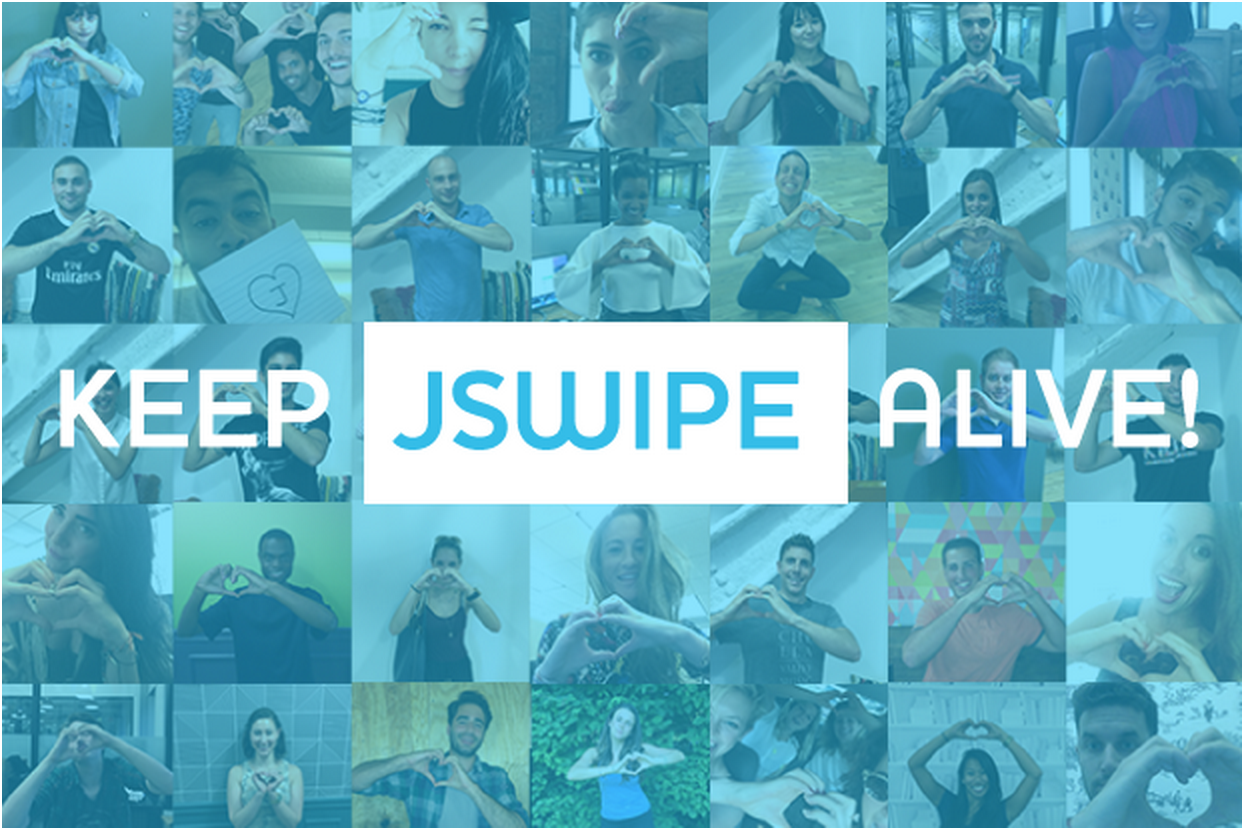 Last month, it emerged that the owner of JDate, Spark Networks, had sued Jewish dating rival JSwipe over its use of the letter “J”.

Spark Networks claim intellectual property of the letter “J”, saying that JSwipe’s use of it is a violation of their trademark feature.

And now JSwipe has launched a crowdfunding campaign, to try and raise money for the “outrageous” legal fees from the lawsuit.

On the Indiegogo campaign page, the founder of JSwipe, David Yarus said:

“Spark Networks takes in over 50-million dollars per year in FEES from their online dating networks, including JDate, ChristianMingle, and BlackSingles.

“JSwipe, on the other hand, is a small team based out of a factory in Brooklyn – motivated by passion, inspired by impact, and committed to making love free.”

He quotes Rabbi Yaffe, Dean of the Institute of American and Talmudic Law, in a recent article saying: “from a Judaic ethics standpoint, this lawsuit is inappropriate.”

Alongside the dispute over the letter “J”, Spark Networks also says it owns a patent that: “confidentially determines matches and notifies users of mutual matches in feelings and interests.”

The public company has previously sued other rivals OkCupid, 2RedBeans and Zoosk over this patent. JSwipe founder Yarus says his app has over 375,000 members from 70 countries around the world, and has seen 10m matches, 40m messages, and 800m swipes.

Speaking about why he created the app, which launched over Passover in 2014, he said: “Outdated and expensive Jewish dating sites simply didn’t resonate with my generation, and there had been little innovation for our community in over a decade. We needed to bring Jewish dating into the 21st century.”

On the campaign page, Yarus says legal consultants think it could cost another $300,000 to $500,000 in legal fees to see the case through, on top of the hundreds of thousands already billed.

The CEO said: “Every dollar that could be going towards building a faster, stronger, better app with exciting new features and loads more users is instead going to fight the legal battle to KEEP LOVE FREE. And because it’s free, we can use all the support we can get!”

He says all money raised will go towards the legal battle, and if the lawsuit is dropped, the money will go towards improving and building the app – which he promises will always be free.

The campaign has so far raised $18,378 from 114 people in just six days, but it is looking for ten times that to reach its goal.

JDate is currently haemorrhaging users — reporting a 13.4% decrease in subscribers compared to Q4 2014, and a 5.2% decrease from the year before.