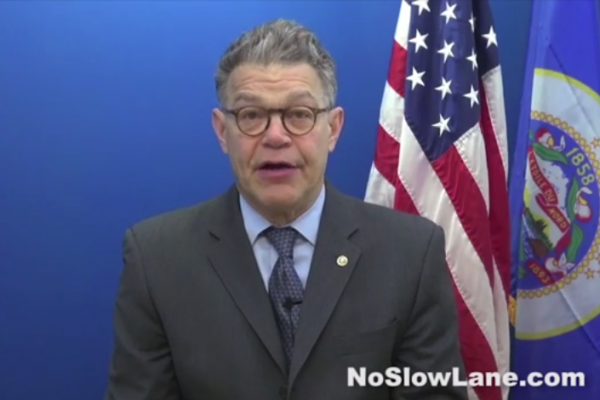 Senator Al Franken has called the debate around net neutrality “the free speech issue of our time”.

The FCC recently announced proposed rules which would allow companies to pay for higher speed internet.

Under the ruling, companies such as Netflix and Skype could pay ISPs for so-called “fast lanes”, giving them access to higher connection speeds.

Critics say this would be harmful to net neutrality, by creating a tiered system that would give control of the web to major corporations.

Net neutrality is the principle that ISPs and governments should treat all internet data equally.

And in a video to NoSlowLane, Senator Franken – who has been a critic of dating-related technologies and products – has said these plans put net neutrality “under threat as it never has been.”

Franken cites the story of YouTube as an example of what a free and open internet can achieve.

Yesterday, more than 100 tech companies – including Google, Facebook and Twitter – signed a letter calling these rules “a grave threat to the internet”.

“According to recent news reports, the Commission intends to propose rules that would enable phone and cable Internet service providers to discriminate both technically and ï¬nancially against Internet companies and to impose new tolls on them.

“If these reports are correct, this represents a grave threat to the Internet. Instead of permitting individualized bargaining and discrimination, the Commission’s rules should protect users and Internet companies on both ï¬xed and mobile platforms against blocking, discrimination, and paid prioritization, and should make the market for Internet services more transparent.

“The rules should provide certainty to all market participants and keep the costs of regulation low. Such rules are essential for the future of the Internet.”

The FCC are currently debating the proposed changes, and are due to vote on the creation of these “fast lanes” on May 15th.