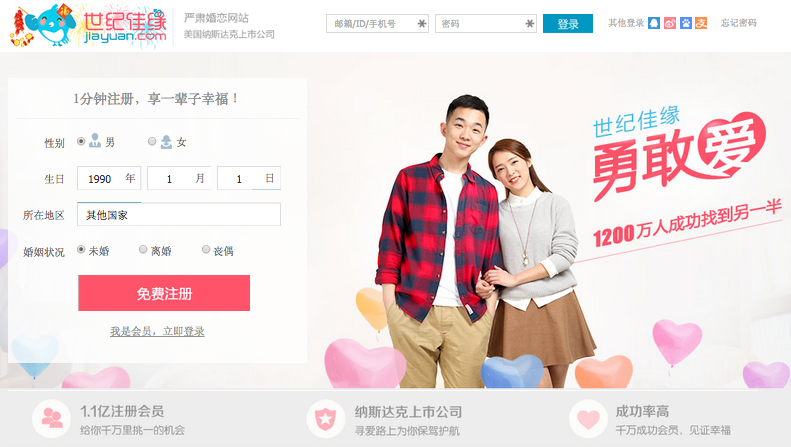 Jiayuan, which was pitched a massive going private buyout offer earlier this year, will instead be bought by Baihe, and merged with Baihe subsidiaries LoveWorld and FutureWorld.

This deal values Jiayuan at $250m.

Jiayuan said this share price is a 62.9% increase from the company’s share price on March 2nd, the day before Jiayuan received a “going private” proposal from Vast Profit Holdings.

At the time, Vast Profit said they would buy shares at $5.36 per American Depositary Share, or $3.58 per ordinary share.

They had previously privately agreed to buy over 8m shares – 19.6% of the company’s total outstanding shares — from Aprilsky, a subsidiary owned by Pangu Trust, whose settlor is Jiayuan founder Rose Gong.

After this March offer, a US investment firm called Heng Ren said Vast Profit’s offer “substantially undervalues” the company, and should be raised by 119%.

Heng Ren Managing Partner Peter Halesworth said this was because the offer came “with Jiayuan.com’s stock depressed near a 52-week low after a difficult 2014.”

The merger is expected to close “no later” than the first quarter of 2016, and is subject to customary closing conditions, as well as a two-thirds majority vote in favour by shareholders.

Once the merger is completed, the director and CEO of Jiayuan, Mr. Linguang Wu, will serve as co-chairman and co-CEO of the new company, which will be merged with Future World Inc, and given a new name.

This was driven by a big growth in its personal matchmaking business, which saw revenues increase by 37.7%.

Despite this, its total number of active users dropped from 6.1m to 5.3m, with its CFO Shang Koo saying the company was focusing completely on profitability, and Jiayuan had massively reduced its spending on user acquisition.

This merger deal is a huge moment of consolidation in the Chinese dating industry – with Baihe now the main player in this massive market.

And with an IPO apparently on the cards for next year, over the next year we could see Baihe become a truly global player.