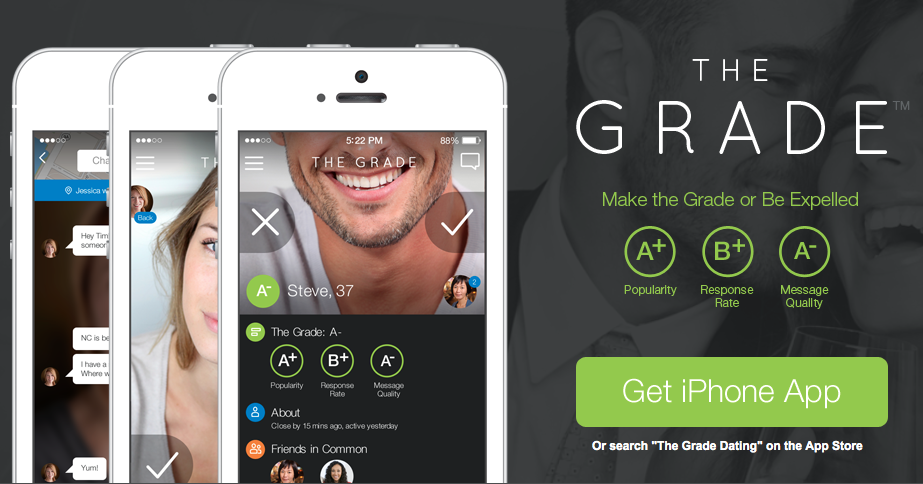 New York dating app The Grade has just launched a major update to its product – letting users rate both their online and offline experiences.

The new feature is called Peer Review, and lets singles give direct feedback about their experiences with their matches.

The feature is an extension of The Grade’s current system, which aims to add accountability to user behaviour by assigning each member a grade, from A+ to F.

Speaking about the new feature, SNAP Interactive CEO Cliff Lerner said: “Our users felt that we could improve transparency and curb bad behavior even more effectively by incorporating direct user feedback into the proprietary grading algorithm.

“The most requested feature by women was a way to influence a male match’s grade based on interactions outside the app, such as a date, email or text interaction.

“Now, with our new ‘Peer Review’ feature, we enable both male and female users to directly influence each other’s grade based on both in-app and offline experiences. Offenders can be held accountable, and desirable singles can be duly acknowledged, through Peer Review – a feature that we believe has never been implemented or existed before in the online dating industry.”

Peer Review comes in the format of a series of short questions, such as “Is he/she a quality person?” or “How do you know this person?”

There is then a drop-down menu of selections that users can choose to explain how they know each other, such as “friends,” “co-workers” or “met on The Grade.”

The feedback is then “weighted differentially in calculating a user’s Peer Review grade related to the strength of the relationship, which is intended to attribute credibility to the best review sources and mitigate potential bias.”

The app then shows what the user’s grades are in three different categories – Peer Review, Profile and Messaging – to let their prospective matches weigh up the quality of the match.

These are then combined to give an overall grade, and any that get a “D” receive a warning, and those with an “F” are at risk of expulsion.

Check out The Grade here.