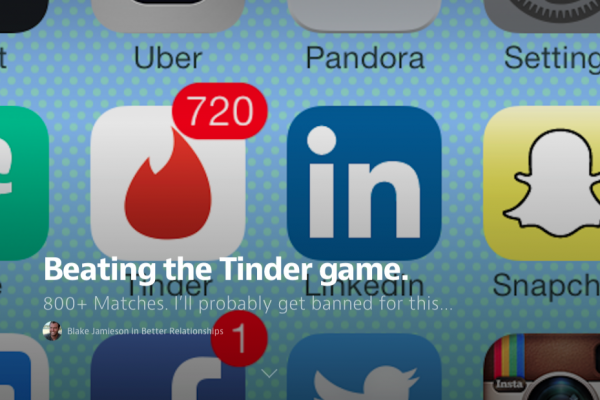 A digital marketer found a novel way to game Tinder, which led to him getting over 800 matches.

Blake Jamieson used his photoshop skills to make it seem like his profile had been endorsed by Tinder.

Jamieson took the Tinder logo, photoshopped its outline over his profile photos, and added messages such as “Match of the Day” underneath.

For his other photos, Jamieson created the following five phrases, based on attributes he felt Tinder users might respond to.

After doing this, the digital marketer swiped right on “EVERYONE”, to make sure he would get immediate matches.

He hoped his “endorsed” profile “would add more trust and credibility, which would result in more matches”, and it did.

The matches started rushing in – reaching over 800 before long – so he decided to use this incoming traffic by updating his bio with a link to his Medium account.

On this “Tinderventure”, Jamieson said that although the ratio of women who replied stayed the same – and less than 8% of women messaged first – he received hundreds more matches after changing his profile.

He denies any accusations that he led people on, saying he had a “handful of great conversations with people I might have otherwise never met,” but asked if he exploited the platform, replied “hell yes I did”.

Jamieson says he expects to be shut down as soon as Tinder catch wind of his article, but in the meantime, offers his templates as a download, for any interested users.