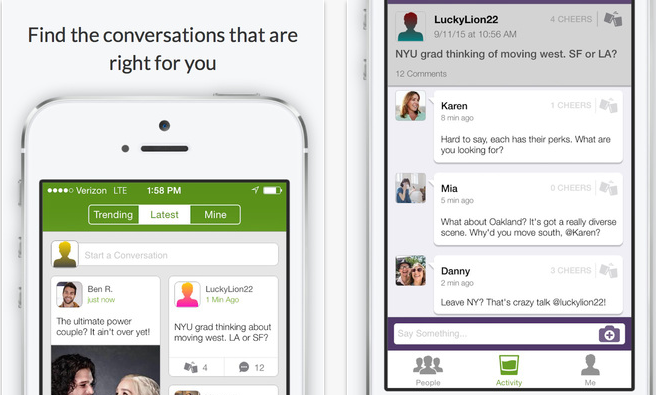 A recently launched networking app is helping its like-minded users connect, by letting them get to know one another in a virtual bar setting.

OpenBar was officially launched last week by its parent company BarTrendr, in an effort to put people in touch with others who share similar interests and opinions.

The platform’s interface takes shape in the form of a virtual bar, allowing “users [to] enjoy all of the social gratifications of going to a bar but with added benefit of being able to do it at any time”.

Before its official launch, BarTrendr surveyed 50,000 of its users in a bit to find out what consumers really wanted from a social media platform.

It found that 81 percent of users would prefer a platform that allowed them to have a “consistent personality” and more grown-up conversations. The app’s algorithm works similarly to those used by Spotify and iTunes, generating a range of conversation starting points to help users connect either in groups or through private conversations.

Speaking about the reasons for why the app was created, OpenBar co-founder and CEO Devon Bergman said: “Since launching BARTRENDr, the team realized that we were on to something bigger.

“While the app started as a platform to check out the bar scene, we found out that users were really looking to find more ways to engage with each other.

“Answering the requests of our users, we’ve decided to launch an entirely renovated version with a more enhanced consumer focus. With OpenBar, you can meet new people, strike up a dialog, find the conversations that are right for you, or just sit back and enjoy following the chatter.”

Once downloaded, users are able to join private conversations, create open chats and comment on shared posts about a range of topics from current affairs to dating, all over a virtual drink. The platform has three main pages, “Trending,” “Latest,” and “Mine”, which can also be used to share information including what they are drinking and where they are.

And to add to the app’s virtual bar setting, users also have the option to “cheers” other users.

Bergman added: “Our main goal of OpenBar is to give users the opportunity to start personal conversations as well as with larger groups regarding topics that interest them most.

“For example, if you like to discuss baseball with your OpenBar friends, the app will not only suggest other related conversations you may like to take part in, but individuals that best align with your personality.”

OpenBar is currently available to download for iOS and Android devices.