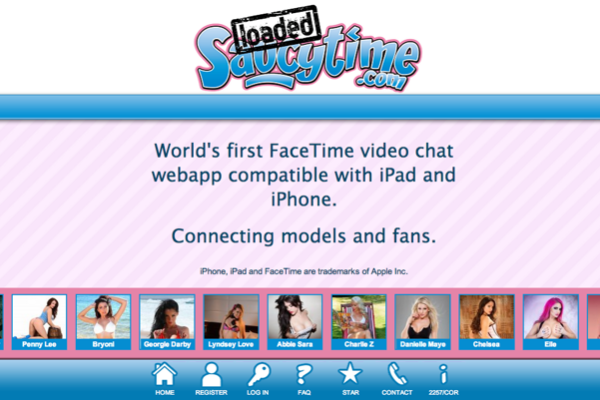 FaceTime is becoming an increasingly popular platform for webcam girls, according to a report in Vice.

The creator of SaucyTime, a web app which lets customers book FaceTime sessions with models, says it has around 50,000 users, from 88 countries, since their 2012 launch.

Chris Jeffery says his site – which is available on iPad and iPhone – is the first of its kind.

Because SaucyTime isn’t downloadable through the App Store, it doesn’t have to worry about Apple’s notoriously conservative entry policy, which dating apps BangWithFriends, and sex-on-demand app Pure, fell foul of.

Users visit the site on their iPad, choose from over 40 models, book a time and length of call and the model gets in touch via Facetime.

“We take glamour models off that pedestal and make them attainable.

“It’s about personality and attitude, but this isn’t about baring your breasts – it’s about being a fantasy girlfriend, the sort of girl these guys would want to go out for a beer with.

“There’s an emotional investment you just don’t get if you’re tapping out messages on a keyboard.”

SaucyTime’s going rate is £2 per minute, and users only pay for the minutes they use, there are no membership fees or premium rate telephone charges.

Amy Lu Bennett, a 26-year-old glamour model who owns Xtreme Playpen, told Vice that the majority of these FaceTime calls are unadvertised, and exist in chat rooms and private inboxes.

“I don’t really advertise FaceTime. Someone will see you on TV or online, then they either tweet you and message you, or ask for your email address to arrange.

“I think girls don’t want to publicise that they’re doing FaceTime for a certain amount, because once you put out a rate everyone can say, ‘Well, I saw you only charge this much,’ or, ‘I saw someone cheaper’.”

She estimated that for a one hour glamour shoot she might make £50, but could charge the same amount for just 15 minutes of FaceTime.