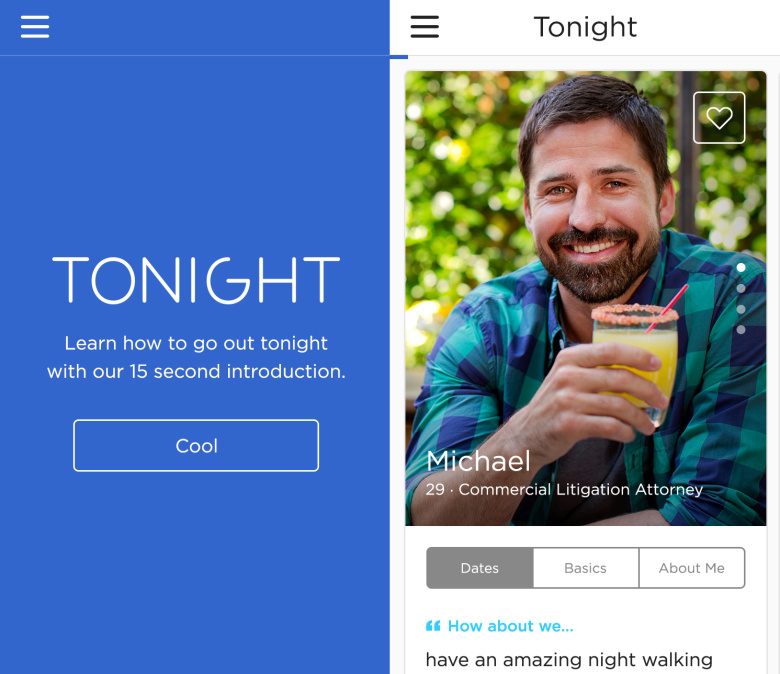 The feature aims to set up a date in “less than five minutes”, by finding you a date to go on that evening.

Users simply say they fancy a date that night, and are shown 20 people who are also interested.

You then say which people you’d like to go out with, and HowAboutWe matches up two people, based on their preferences. Once you’ve been matched, you are put in contact via text to make plans and meet up.

If no matches are made in the initial 20, you are shown another round of potential dates.

The new service is designed to cut out the back and forth of online dating, and let HowAboutWe deal with the “final selection process” that can often stall date plans.

Tonight is part of a redesigned HowAboutWe, who have been fairly quiet since the company was sold to IAC last year. In addition to this new feature, HowAboutWe are making it free for users who like each other to message.

Prior to this, users could browse date ideas and singles for free, but pay to message – but now those who show a mutual interest in one another can chat without paying.

This is part of a new Tinder-style functionality on the HowAboutWe app called Pool – where users can say yes or no to singles and their “How about we…” date idea.

The Brooklyn-based company also released Connection, which are highly-targeted daily matches, much like Coffee Meets Bagel.

The site is currently being run by co-founder and CEO Brian Schechter, after fellow founder Aaron Schildkrout left the company last year, and is now working at Uber.

Check out the new app here.