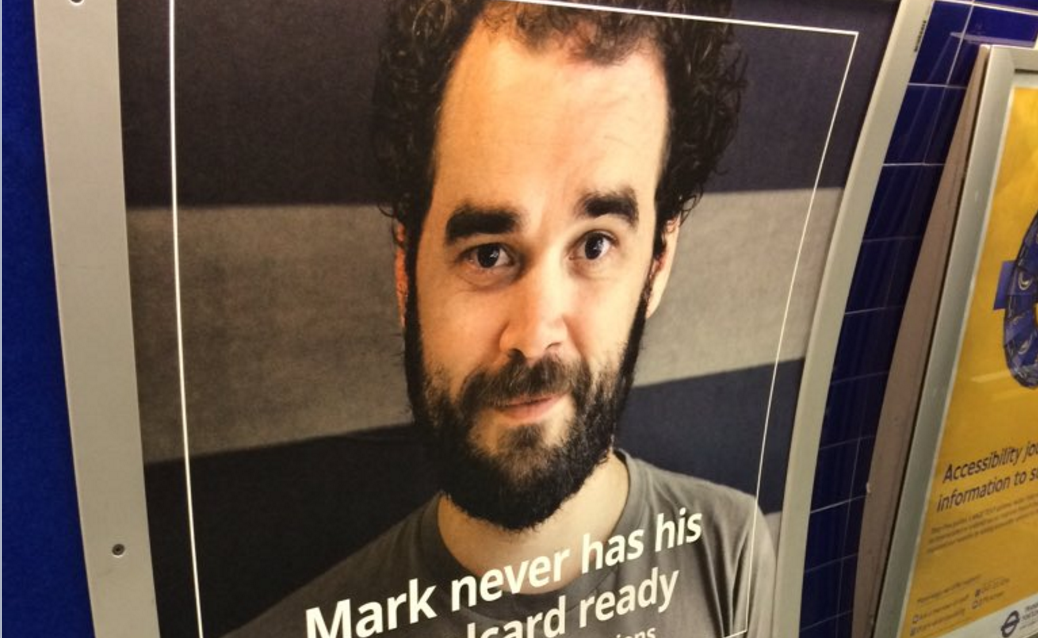 A poster advert for popular dating site Match.com has received some amusing attention from London commuters over the past few weeks.

As part of its #LoveYourImperfections marketing campaign, Match has created some London-specific adverts that have appeared on the platforms of a number of underground stations.

Whereas previous ads carried messages like “Someone out there also loves your dad jokes”, the new ads have been tailored to a London audience, with straplines like “Charlotte can’t pronounce Marylebone”.

And one of these ads, which features a man called Mark, has particularly caught the public’s attention, because his imperfection is that he “never has his travelcard ready.” This clever poster has struck a chord with Londoners, by recognising commuters’ shared annoyance at people who block the ticket barriers on the tube, and some have taken to social media to shame “Mark” for this infuriating trait.

Since the campaign first appeared, Twitter users have taken offence to his quirk, branding Mark a “monster”, with no consideration for other tube-goers.

@EvanEdinger Mark, you had one fucking job, now you're holding up the entire queue, don't go on Match .com Mark No one will ever love you

However, the female version of the poster, Charlotte, has been acknowledged for her “sweet” inability to pronounce Marylebone correctly.

A spokesperson from Match.com said: “While Mark is an actor, his imperfection is clumsiness and in this case, it leads to him forget to have his travel card ready to swipe through the tube barriers — something that we’re sure many Londoners can relate to.

“Our adverts are intended to spark debate and we’re glad to see that Mark’s one has done just that.”

Match.com’s Mark has also responded to the public’s comments, saying: “Hi, I’m Mark. I’ve been reading your posts and I know what you said about me.

“Yes, I admit it. I never have my travel card ready on the tube. That is my confession. I estimate that it takes me no more than 20 seconds to find my card. 20 seconds! Is that really such a life changing amount of time?

“I daydream a little every now and then, is that such a big deal?

“Does my occasional failure to pay attention at the barrier really make me a bad person? I don’t think so, and I know you don’t really want to get to work anyway.”

Recently, Match.com released a new TV ad for its very successful Love Your Imperfections campaign, which puts a clever twist on the ad and its message.

At the end of last year, the campaign was honoured by winning Best Dating-Related Marketing Campaign of 2015 at the UK Dating Awards.