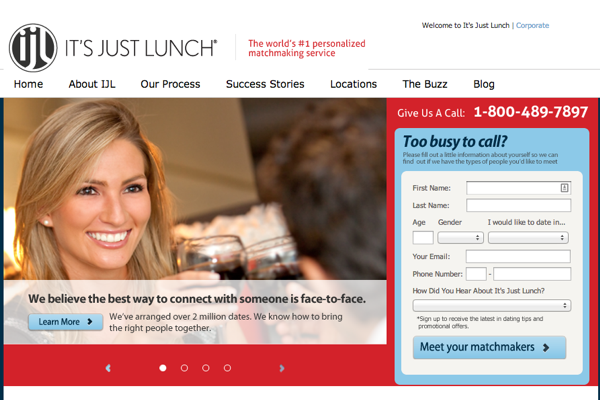 Matchmaking service It’s Just Lunch International is facing a nationwide class-action lawsuit by clients, who claim they were defrauded.

The case states that the company relied on a sales pitch which promised multiple matches, whether it was true or not.

The San Diego-based It’s Just Lunch was founded in 1991 and claims to have arranged 2m first dates, and matched together tens of thousands of single professionals.

The matchmaking service, which bills itself as “Dating for Busy Professionals”, operates across the US and internationally.

US District Judge Sidney Stein said: “In short, virtually all evidence in the record indicates that during the period at issue, IJL staff relied on a uniform script to inform prospective customers during initial interviews that IJL already had at least two matches in mind for those customers’ first dates regardless of whether or not that was true.”

Staff were apparently told to stick to the script, which said to tell prospective members “Oh, by the way, I’ve got three people that I’m thinking for you just off the top of my head.”

The suit says that It’s Just Lunch structured their sales pitch to collect payment from customers immediately after making the “multiple match” representation.

It also said that the company also charged more than $1,000 per year, which violates New York’s General Business laws.

John Balestriere, lawyer for the plaintiffs said the decision to allow clients to pursue a class-action suit was “a complete victory.”