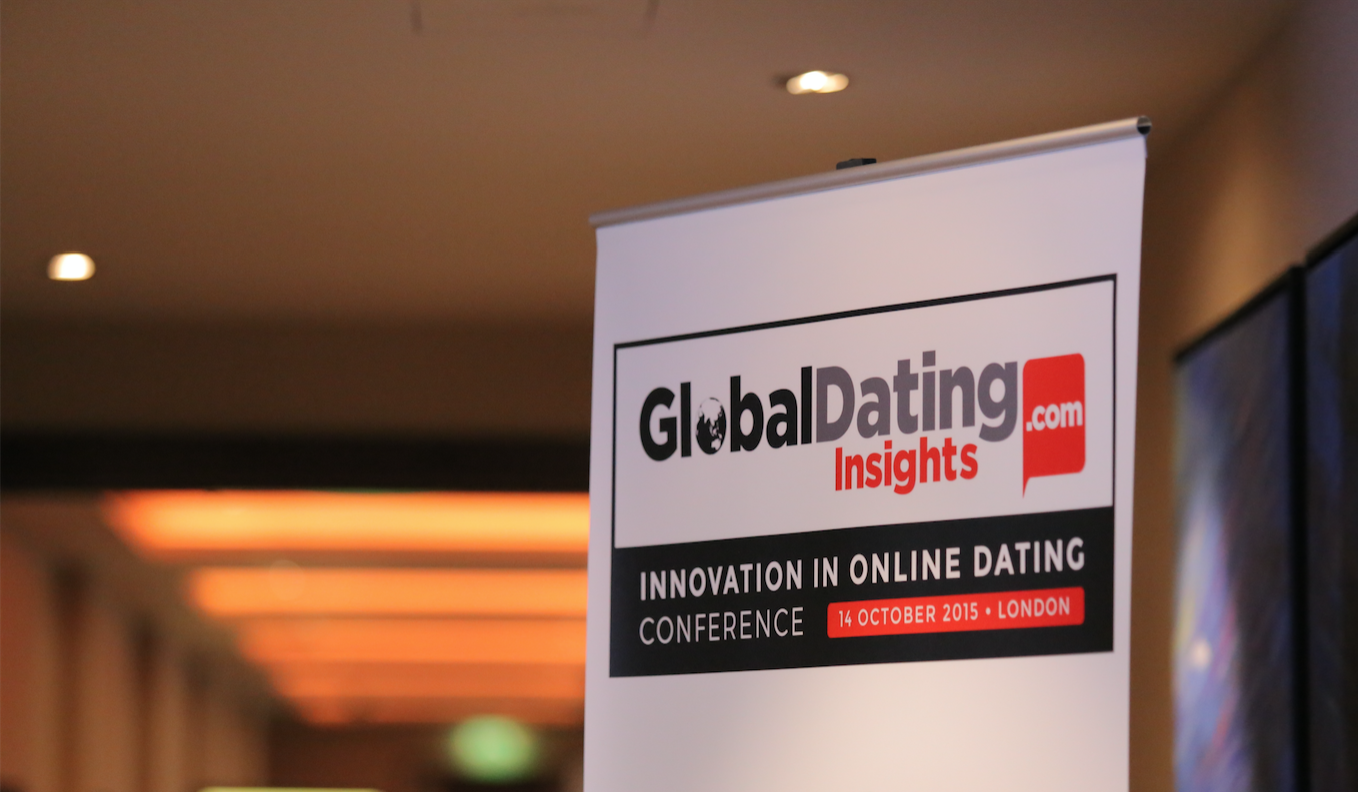 Online dating is currently in a period of transformation, with increased social acceptance and advancements in technology colliding to reshape the industry.

The mobile revolution and free apps like Tinder have introduced new users, with new expectations, to online dating.

This has not only inspired new entrants to innovate, but also forced established players to adapt to survive.

So in this changing landscape, how can online dating brands new and old provide better services for their users, improve trust and security, while maintaining a profitable business?

These were some of the big questions dealt with at the inaugural GDI conference in London last week, which we are very pleased to say was a huge success.

It was a fantastic day of talks, debate and networking, with industry players grappling with some vital topics, while also sharing tips for growth and giving insights into their own businesses.

For those of you who were unable to attend, we’d like to give a brief round-up of the day as it unfolded, sharing some of the key ideas and areas of discussion that arose.

After a welcoming speech by GDI founder Simon Corbett, the day of talks was kicked off by White Label Dating’s Steve Pammenter.

As co-founder of White Label Dating, Steve emphasised the importance of incorporating niche dating services into your brand portfolio – something he believes is now essential to remaining relevant and retaining customers in this competitive market.

He also gave away the incredible stat that White Label Dating has 50% of the UK adult population in its database.

Pammenter also spoke candidly about WLD’s move into the US, saying that although they expected their tried and tested English-speaking model to be easily transferable to a market with so much potential, their initial movements in the US were a failure.

They encountered customer service problems, with some US members waiting eight hours for their profiles to be moderated, along with the credit cards of users being declined by banks.

To right these wrongs, the UK company implemented a number of changes: appointing a head of payments, introducing 24-hour moderation and customer care, adding new closely-tailored niches, and their customers started to come back. Following Steve was Geoff White, a technology journalist for Channel 4 and ITN, who spoke in depth about three online dating scandals he has covered, and helped to break.

These were the AdultFriendFinder data breach, a Channel 4 segment claiming that Tinder’s average age was 13, and the recent devastating Ashley Madison hack.

White was the journalist who broke the AdultFriendFinder story, finding the incredibly personal data of 3.9m users posted on the dark web, by a hacker who said he did it because the company owed his friend $200. He said he believes such journalism is important because it holds tech companies up to high standards, who in the process of believing, and often genuinely implementing, positive change in the world, can be blinded to the fact that some of their practices are disagreeable to the public.

Next was Ben Greenock and Gary MacDonough, the young co-founders behind dating startup Double, who gave a fantastic run-down of 20 hacks to grow your mobile dating app.

Included in these brilliant tips – which co-founder Gary McDonough said were learned in just six months – was advice such as: dating apps can use the extremely successful referral schemes used by Uber, where users get £10 free credit when their friend uses the service.

For example, Happn gives in-app credit for each user you successfully invite, so there is an incentive for them to tell their friends about the app. After a short networking break, we then had the founder and CTO of Dating Factory, Tanya Fathers and Daniel Evans, speaking about selling their business – something they completed last month, selling Dating Factory to Agile Wings.

The incredibly informative talk touched on why companies might want to sell, along with a step-by-step guide through all the house-keeping and legal processes you have to jump through to complete a sale.

Following this, David Deakin from law firm Lewis Silkin continued this tract, with a content-rich list of the top 10 legal tips for online dating companies, to help them avoid risk and ensure legal compliance.

One such takeaway was that next year, there will be new laws giving a broader definition of “personal data”, which will now include particular user demographics and categories.

In addition to this, data processors will be directly accountable for breaches along with the controller, and heavy fines are likely to be introduced, potentially up to 5% of annual revenue.

As with all the other talks, please contact us if you attended the conference and want the slides.

One story that was mentioned a number of times throughout the day was The Match Group’s amazing acquisition of PlentyOfFish for $575m, which was singlehandedly built by founder Markus Frind over 10 years ago.

For anyone with dreams of following in Frind’s footsteps, the next talk by David Ronald Minns from Platform Dating on how to build your own dating startup without any funding was the perfect inspiration.

During his talk, he offered tips that would be invaluable to anyone wanting to set up a site with no funding, such as creating an efficient marketing strategy, using SEO and blog content to push the brand, optimising everything (including your working week) and ensuring that your mobile user experience is very strong.

With these steps, his own site, SaucyDates sees a conversion rate of 25.3% and has a speed of 279ms, which is faster than 99% of all websites tested.

After a lunch in The Grange’s five star restaurant, Hub People’s Michael O’Sullivan continued the data-driven theme, explaining exactly what data can reveal about your users.

The 30-minute long talk revealed all the data that brands should be collecting, such as geo-location, payment and registration attempts, and all types of engagement stats. The CEO also spoke about the importance of asking for user feedback, particularly when introducing new features to your services, saying that if you want to change something, survey your users first, then implement it, even if they don’t like it.

He said Hub People found that its customers did not complain about a change if they had been canvassed for opinion on it first.

Next to take the stage was Lovestruck co-founder Laurence Holloway, delivering a thought-provoking presentation on whether paid and premium services can survive in a mobile multiscreen world.

The philosophical talk looked at the history of the industry over the past few years – how Tinder has shaken up online dating, and what that means for premium services and the future of monetisation of dating products.

Holloway wondered whether, with the implementation and introduction of some subscription offerings like Tinder Plus (a $9.99 premium service), Happn’s Charm and Coffee Meets Bagel’s in-app bean currency, after the free revolution, we are seeing a resurgence of the premium/subscription model with mobile dating.

For the ninth talk of the day, Christine Andrews of Data IQ gave a presentation about one of the biggest issues in the modern dating industry – securing your personal user data.

An expert in data security, Christine advised attendees to ensure they have a clear process to execute in case of a breach, describing the matter as a case of “when”, not “if”, saying one in five business are predicted to encounter material data breaches in the next two years.

She also advised companies who have private databases to consider implementing professional website security options, such as Sharkgate, and outlined the UK government’s Innovation Vouchers scheme that gives money to companies to help them secure their sites.

To kick off the final instalment of talks, the head of Venntro Ventures, Tom Packer, spoke about why dating startups should consider joining Venntro’s new startup program.

Packer built startups like MyVoucherCodes, which was sold for $57m, ShoppingVouchers and MyDeals, before being chosen by Venntro CEO Ross Williams to lead the new startup division.

He appealed to dating startups, saying that if you have a solid model, but are struggling with acquiring users, Venntro has a database of around 45m members – along with office space, financial know-how and a solid company structure – that startups can use to achieve the growth they crave.

Shortly after, the conference welcomed LGBTQ social app Her‘s growth specialist Barbara Galiza, who ruminated on whether creativity still has a role in data-driven marketing.

Barbara outlined the key benefits of data-driven marketing, noting not only that it helps to find out what makes your users “tick”, but it also stops you from repeating the same mistakes over and over again.

One particular insight was that sites should test which words perform best with their target audience.

Galiza said they found the best performing ads and posts didn’t reference dating at all – which was one way they realised their users were looking for a more community and social-orientated product.

For the final talk before the panel debate, Wamba’s Gloria Diez spoke about how user behaviour should help to define a dating site’s strategy.

She spoke about how Wamba expanded to house 31m users, and the trials and tribulations of launching dating services in new countries and cultures – stressing the importance of realising that not every country will be suited to just one business model. Tips included how to market your brand as a social space, implementing features like social gaming and in-app credits, and working out how much people in different markets are willing to pay for online dating services.

We ended the day with a fascinating discussion between executives from top dating companies like Venntro, Hub People, OlÃ© Dating, rendeevoo and Dating Factory, which was chaired by George Kidd from the Online Dating Association.

A very lively discussion, the panel gave their thoughts on the future of the industry, wearables, mobile monetisation, and the importance of protecting users against fraud, and securing their personal data.

It was clear from all the experts that although these are very exciting times for the industry, the added spotlight and increase in popularity brings new responsibilities for dating services, all agreeing that the future lies in providing the most seamless, user-friendly, mobile-orientated services, in order to stay afloat in these changing tides.

We ended the day in The Grange’s Sport Bar, with a subsidised bar and party thrown by sponsors Warehouse Dating for a well-earned drink and network with members of the industry.

It was a fantastic day in London, and we want to give a massive thanks to all those who attended, along with all our sponsors and brilliant speakers.

This event was the first of many for GDI, so please keep a look out for further announcements in the future, as we look to keeping growing our influence and continue to inform our readers about this thriving and exciting industry.