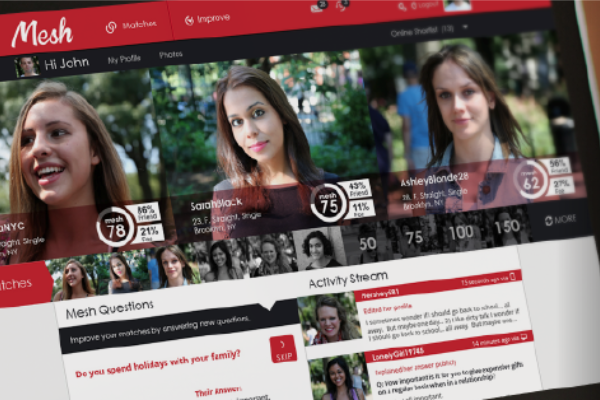 A Brooklyn-based dating site called Mesh ranks matches by a combination of message filtering and the answers users give to non-negotiable questions.

Messages that do not fit a user’s set preferences are placed in a Mismatch folder.

Mesh also uses Dealbreakers, which makes sure users will only receive messages from people who have answered non-negotiable questions correctly.

“Harassment and undesirable vulgarity runs unchecked while quality messages get lost in the shuffle, leaving many women with a negative experience.

“The result is like no other online dating service currently available. We hope not only to bring people together better, but to make online dating enjoyable and trustworthy again.”

The dating service also uses a Only Mesh Knows feature – which lets you notify the matching system of your private preferences, which are kept hidden from all other members.

The site also allows users to identify themselves as queer and transgender.

Mesh is in a pre-beta launch, with plans for a full release in early Spring 2014 in New York, New Jersey and Connecticut.

Last month, Zoosk introduced a similar feature, which ranks inbox messages by the compatibility of the sender.

Priority Inbox pushes messages to the top of a user’s inbox if they are sent by someone Zoosk’s matching technology thinks would be a good match.

Tinder’s functionality means that women who use online dating are now used to, and expect, features which stop them being bombarded with messages, and dating sites are starting to introduce features to change this.