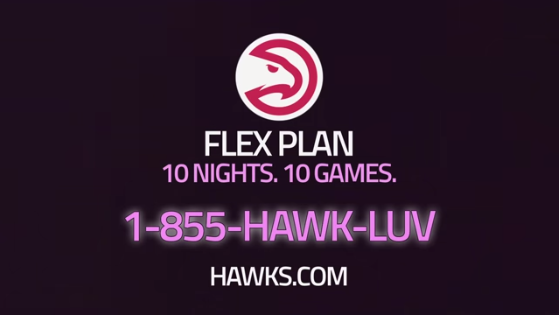 In an attempt to get basketball fans to cheat on their team this season, the Atlanta Hawks have rolled out a new Ashley Madison-inspired ad campaign.

The adultery-themed campaign has been launched to promote the Hawks’ 10-game Flex Plan ticket deal, ahead of the 2015-16 season.

The new ads come one month after the infidelity site suffered an extreme security breach, in which the personal data of 33m Ashley Madison users was released onto the Internet.

And now, the Hawks are using the site’s recent bad publicity to try and strengthen its marketing efforts and publicise its new deal.

In a statement, the Hawks Basketball Club said they have signed “three real-life people named Ashley Madison to promote the team’s new 10-game flex plans. Fans are encouraged to start a new love affair with the team by customizing their own unique ticket plan to ensure they are at all of the top games during the 2015-16 season and receive the best selection of games, seats and pricing.”

The three real-life “Ashley Madisons” are two women and one man, who are all from Georgia.

According to ESPN, the club has also created a hotline (855-HAWK-LUV), that allows fans to chat to sexy-voiced woman as they wait to be put through to a Hawks ticket representative.

This is not the first time that the Atlanta Hawks have been associated with a dating platform.

Previously, the team hosted a successful Tinder-themed night during a home game.

Check out the full ad below: