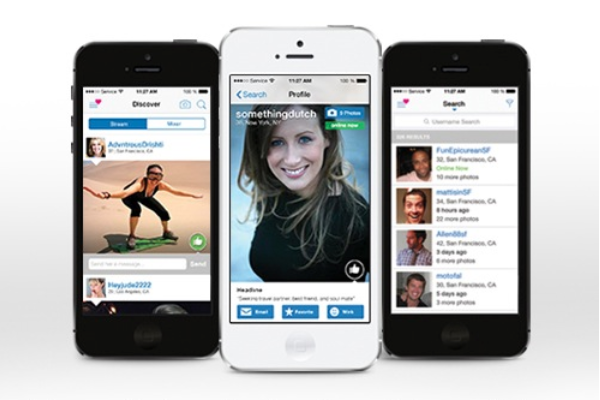 Match.com have just released a redesigned app for iOS7, with brand new features for mobile users.

Match’s 3.0 version reimagines their iPhone app, with a cleaner design tailored for iOS7 that is reminiscent of Apple’s native apps.

New profile layouts allow for larger photos, with options to email, favourite, and wink, along with the ability to take and upload photos on the go.

However the big changes come with two new features in a Discover section: Stream and Mixer.

Stream gives you an Instagram-style scrolling list of users, with multiple large photos and the option to message immediately.

The users generated in Stream are based on your preferences, location and previous activity on the app.

TechCrunch spoke to Match President Amarnath Thombre, who said they wanted to include multiple photos in Stream, while also cutting down the number of clicks for users.

Thombre said: “The challenge was to leverage all the rich data that Match has about users, like secondary photos and information from their bio, and make it super lightweight.

“With the Stream, users can see a lot of information about their potential matches without ever clicking in to anything.”

The other feature is Mixer, which borrows the functionality of IAC sibling Tinder, offering up nearby matches in a swipeable yes/no interface, where a mutual yes puts both in contact.

Speaking to PandoDaily, Thombre said: “The most natural way to find people is to feel like you’re bumping into them by accident.

“We tried to simulate that experience with Mixer, while at the same time allowing user to browse through algorithmically curated profiles faster and easier than ever before.”

This integration seems part of IAC’s wider strategy of using Tinder as a gateway drug – get people hooked on the free stuff, and they’ll end up paying for something better.

As Thombre said: “We believe that the two platforms can be complementary and additive — once you use one online dating product, you’re more apt to try another or even use multiple simultaneously.”

As you can see above, Match have also made their messaging look very similar to Apple’s iPhone messages.

It tells you when messages are sent, received, and read.

They have also taken the huge step of allowing single-click subscription payments within the app, which will hand Apple 30% of subscriptions that come via mobile.

Around 50% of Match’s subscription are made on mobile, but Match believe that increased user engagement will outweigh the Apple tax.

Thombre said: “For us, this decision was really about reducing friction.

“We’re really excited to learn about what kinds of engagement patterns we can create. We’re confident that increased usage will offset any costs.”

Users who download the app are free to browse and use the Discover features, but you can only message other members with a subscription.