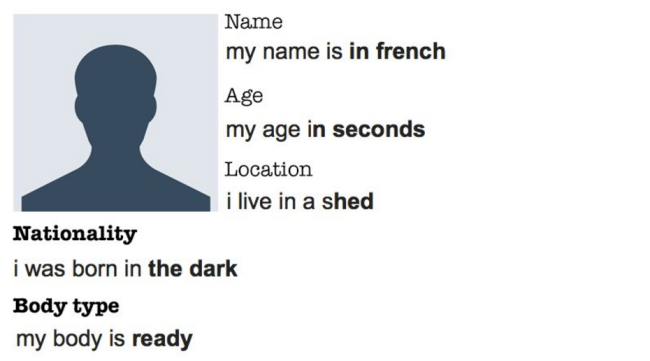 A man has used Google’s autocomplete feature to fill in his online dating profile, and has shared his amusing results on Twitter.

Aaron Gillies, a 28-year old comedy writer, used the search engine’s autocomplete feature to predict the words he was going to write for each section of the dating profile.

The search generated some hilarious results, filling out his name as “in French”, his age as “in seconds” and his turn-ons as “hugging and depression”.

He also attempted to describe his ideal partner, with the autocomplete saying “a person who is addicted to alcohol, who can fix my car and who thinks the earth is flat.”

A handful of users have also been inspired by the funny profile, and have created their own versions using Google and other word prediction services.

One user, called Treyen Udall, shared his own results, which describe him as living in a “hella nice house”, and looking for someone who enjoys “the rest of the conchords”.

.@TechnicallyRon I gave it a go… Treyen â‰ˆ toilet? pic.twitter.com/diN7QNxu2t

And another person, who goes by the name of Empress Nero, created a similar profile using the predictive text keyboard service, Swype: