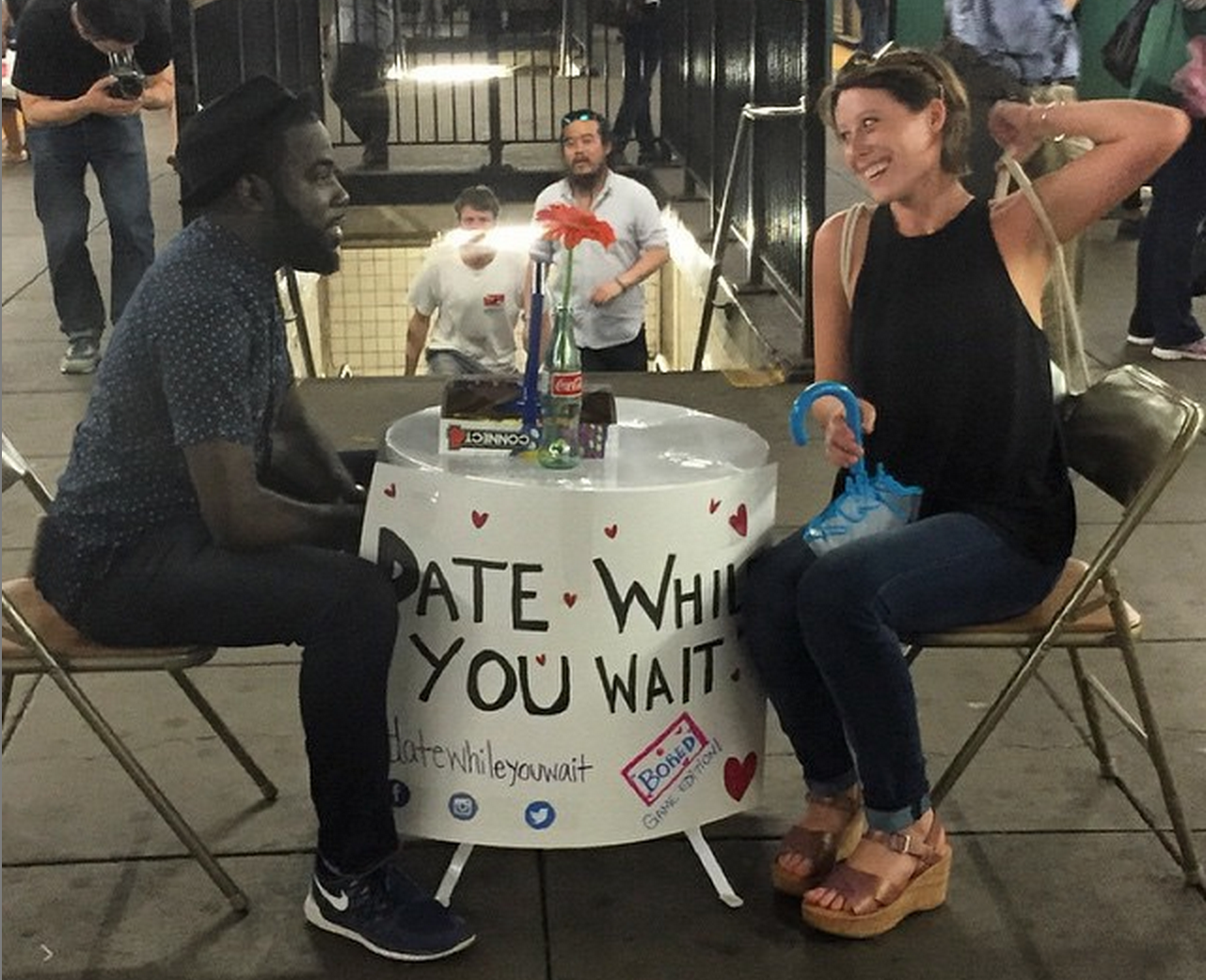 A man is wooing commuters on New York’s busy subway platforms, by offering them a date while they wait for their trains.

Thomas Knox, 28, from Staten Island, New York has taken to station platforms around the city, accompanied by a table, two chairs and flowers, and is encouraging passengers to ‘Date While You Wait’ to pass the time on the platform.

Alongside his romantic set-up, Knox invites his partner to play a game of Connect 4, which he uses to make each date unique, lively and interesting.

A growing number of photos of him playing the game with some of his subway dates have been uploaded to social media by passers-by, and even some of his dates.

One woman posted an Instagram photo using the #DateWhileYouWait hashtag, saying that Knox had brightened up her day.

Day was going kind of shitty, and then I came across this cute fella at West 4th Street and lost a few games of Connect 4 while waiting for the C train. New York always manages to remind you of its charm at the perfect time. #datewhileyouwait A photo posted by Amelia McDonell-Parry (@ameliamagritte) on Jun 23, 2015 at 5:49pm PDT

Since beginning his Date While You Wait service last Saturday, Knox has uploaded over 30 posts to his Facebook and Twitter profiles, and is sending out photos of some of the subway dates.

On his Facebook page, Knox posted saying he “had so much fun connecting with each and every person.”

The 28-year-old said: “I met 18 people in total and even got a free taco from 1. They were people from all walks of life and I feel like we made their days. Everyone kept asking me if I was doing it for money or looking for love, not at all. I just wanted to do something that would bring smiles to people’s faces and enjoy the moment. I cant wait to do it again!” His creative idea is growing in popularity each day, and Knox is receiving messages from commuters, asking him to come to certain stations at particular times.

He plans to continue regularly setting up his makeshift dating scene around the subways of New York, informing passengers of his whereabouts on Facebook and Twitter.

Check out some pictures of Knox’s Date While You Wait idea below, and check out his Facebook and Twitter pages.