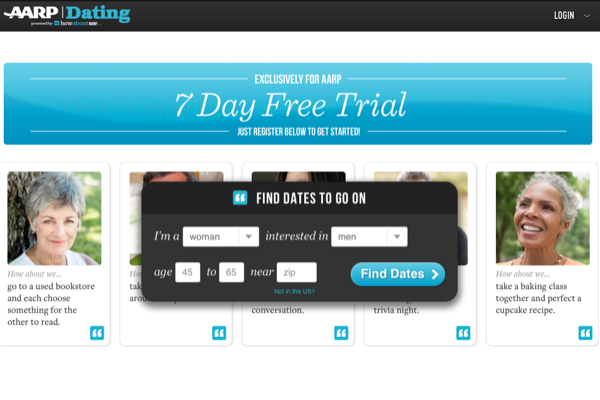 Apartnership between US over 50s group AARP and HowAboutWe has seen over a quarter of a million dates posted since its launch.

AARP – formerly the American Association of Retired Persons – have been partnered with the New York-based dating site for a year, and have seen 50,000 sign up for the service.

The seniors group wants the alliance to help combat social isolation amongst their members.

Statistics show that over 45% of adults over 65 are divorced, separated or widowed, and 17% feel isolated.

AARP’s chief digital officer, Sam Hassanyeh, told NPR that HowAboutWe suits their members, as agreeing to fun activities helps to ease any reticence: “Automatically that gives us something in common.

“It’s sort of an icebreaker.”

A study by the non-profit group – which has a membership of 38m – found that a third of members go on outdoorsy dates, and most prefer cultural activities.

In comparison to HowAboutWe’s 24-34 demographic, they post the majority of dates on a Saturday, whereas the younger group post most on Monday and Wednesday.

Those over 50 are also much more selective, sending 44% fewer messages than the 24-35 age group.

But 54-year-old online dater Aaron Baum told NPR that many in his age range also sign up to a number of sites, to improve their odds:

“You need to meet a lot of people sometimes before you find the right person.

“These online sites give you that opportunity.