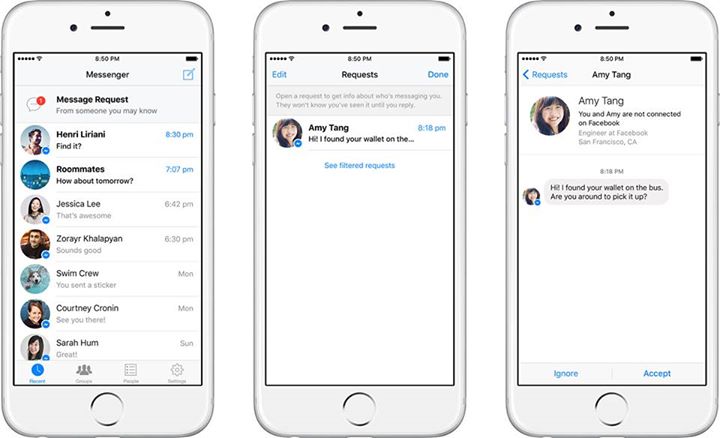 Facebook is rolling out a new feature for Messenger that allows users to send private message requests to anyone, using only their name.

The social media network has launched the Message Request feature in an effort to help people get in touch with others without knowing the person’s phone number.

To make this possible, it has removed the “Other” folder from its web version, and will allow users to accept or decline message requests from other users without the sender knowing their response.

All other Message Requests will remain pending until the user chooses to accept or ignore them.

Forget phone numbers! Today, we’re excited to start rolling out Message Requests for Messenger. We truly want to make Messenger the place where you can find and privately connect with anyone you need to reach, but only be reached by the people you want to communicate with. Now, the only thing you need to talk to virtually anyone in the world, is their name. As a result of these changes, we’re removing the “Other Folder” that was only accessible from the web, and are enabling you to accept or ignore new requests without the requestor knowing you’ve read their message.

The rule is pretty simple: If you’re friends on Facebook, if you have each other’s contact info in your phone and have these synced, or if you have an existing open thread, the new messages from that sender will be routed to your inbox. Everything else will now be a message request, minus spam attempts that we will continue to ruthlessly combat.

While this may seem like a small change, it’s actually a foundational development. Look for more in the months to come as we continue to improve ways to find the people you want to communicate with. And as always, please let us know how we can make this better for you.

Any message requests received from non-friends will be placed in the Message Requests tab at the top of the mobile app, and in the Messages tab for desktop users.

The receiver will be able to see the sender’s name, information including their city, job or mutual friends, and the message.

And should a user choose to ignore a request, the request is then hidden in a Filtered Requests folder alongside any messages that Facebook has identified as spam.

Whilst the update will steer Facebook in the direction to becoming a streamlined hub for business and professional connections, the new feature is likely to make many Facebook users skeptical about receiving message requests from strangers.