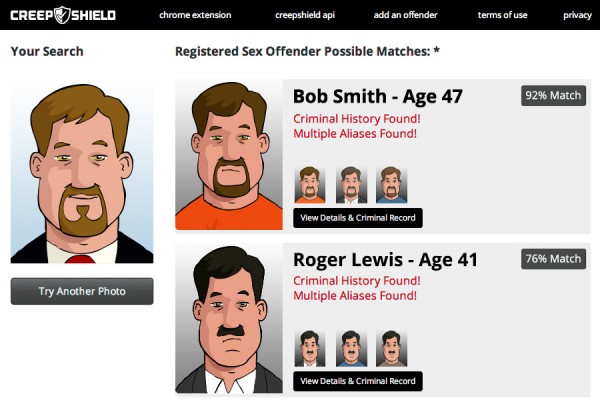 The engine, powered by FacialNetwork.com, allows you to scan any picture from an online dating profile against pictures of registered sex offenders.

You simply copy a picture URL, or upload it on CreepShield.com, and click search to check if a person has a sex offender record.

“We see facial recognition as a tool that can definitely help make online dating safer. While this technology can’t identify everyone out there with bad intentions, it’s a huge step in the right direction.”

FacialNetwork.com has also launched CreepShield Chrome, an extension for the search engine.

This allows you to scan any picture from Google Chrome by right clicking on it and selecting the option “Scan with CreepShield” from the dropdown menu.

Dating sites can also partner with CreepShield to integrate their Enterprise API, which will perform a scan of the profiles in their database.

CreepShield.com has been launched by the same team that created the controversial Google Glass app NameTag, which with a single look would scan someone’s face and match it to their social media and dating profiles.

Senator Al Franken expressed “deep concern” over the app, and appealed to its founders to delay the release of the app, until Washington had formulated policy regarding facial recognition software.

In a letter to Tussy, he said: “I am especially concerned that NameTag plans to scan dating websites such as Match and OkCupid.

“It is easy to envision how this technology could facilitate harassment, stalking, and other threats to personal safety. You company has an obligation to protect users from these threats.”

Google decided not to allow such facial recognition apps on their Glass platform, and the founders put the app on hold.

CreepShield is essentially NameTag for the web, without the Google Glass capabilities -which was the main area of concern for Senator Franken.

Tussy said: “We have delayed NameTag’s release at the Senator’s request and decided to release CreepShield with the goal of immediately making the 41 million Americans who have used online dating sites safer.”

Senator Franken recently re-introduced a bill which looks to ban “stalking apps”, and require companies to get permission before collecting, and sharing, location-based data.

The Location Privacy Protection Act is currently being debated in the House.

Read about the bill here, and about NameTag here.