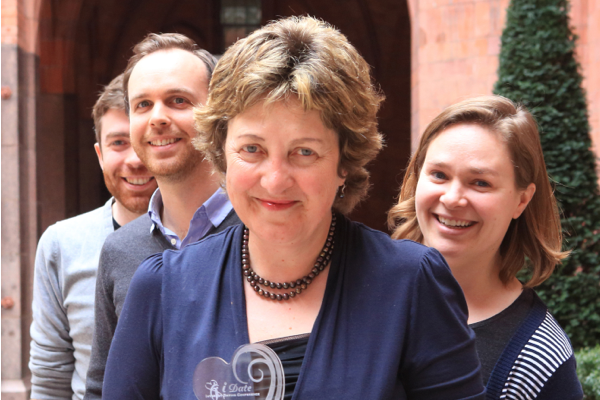 This is a republished blog post by Jackie Elton, founder of Christian Connection.

Christian Connection was launched back in 2000 by Jackie Elton. 15 years on we are still going and still independent. In 2013 we were delighted to win the iDate Award for the Best Niche Dating site. It was a culmination of years of hard work and vision.

The plan from the outset was to serve the Christian community in the UK. In 2004 we launched an Australian site and in 2012 a site for America and Canada. Right now we are in the process of setting up sites for Singapore and Hong Kong. We are based in an office in Central London.

The number of active committed Christians is quite small, between 5% and 10% of the population, depending on how you define Christian — the type of person for whom Christianity is important enough to join a specialised dating site.

Being a small site has helped us for a number of important reasons — from the point of view of the community, it has become really difficult for people to meet other Christians. You can no longer assume anything about what somebody believes. At the same time, many Christians and their churches feel it is really important to marry within the faith — and for many it is simply non-negotiable. Many of our members have stayed single partly because of their beliefs and then sometimes find that their churches don’t know what to do with them because they don’t fit into the family unit that Churches tended to be best at serving.

So the existence of a good reliable site that they can trust is essential. And they are looking for a community and social events as well. It’s a great chance to meet other single people.

Building trust and community is generally at the heart of everything we try to do — while other sites have been able to target huge numbers of joiners and revenues, we know that the important thing for members is trust:

Customer service is a huge part of what we do. We also run social events which in the main are very popular. Plus our members run their own meet-ups in different parts of the country and we sometimes attend the large festivals. We also have very busy discussion boards which can be both very community oriented and supportive but can be quite passionate and controversial.

Recently we have branched out into research — we did a survey of over 3000 single Christians, which is being used to reach out to Christian leaders and open a wider debate about Christian singleness. One of the big challenges in the Christian world is bringing men into the Church and by extension to our dating site! There will always be an imbalance and it is always a challenge.

Because our market is limited, if we lose trust, there won’t be millions of other people around to join. Many of our members come back to us after a time away, and word of mouth as a point of referral is crucial. Christians talk to each other, both in and outside of their churches. They demand very high standards and probably write to the help desk far more than their secular counterparts.

We are based in Central London and we have grown slowly and organically over the last 13 years. We are looking for new ways to reach our wider community and that is our next big challenge. The Christian dating market is diverse and probably very confusing to our potential members (in common with most aspects of the dating industry).

At one end there are very small locally based UK sites with not much traffic and sometimes with a strong religious focus. Many of these have fallen by the wayside but new ones are always popping up, as a Christian individual or even a Church develops a vision to run a dating site.

At the other end, the large brands such as Match and eHarmony also provide facilities for Christian dating.

Then there are white label sites that have christian sections. Often this is little more than good domain name and a front page over what is fundamentally a largely undifferentiated database. Everybody who has signed up and ticked the Christian box may get included, but not everybody defines Christian in the same way. They do manage to get a lot of visiting traffic but we find most Christian members find this doesn’t suit them.

And then there is major international competition which is growing with the use of major advertising campaigns. Christiancafe.com has been the main North American-based site. Recently there has been the emergence of Christian Mingle, which is owned by Spark Networks who also own the Jewish site JDate. Even Friendfinder which its large adult component runs a Christian site but it would be very shocking to any Christian (and of course not just Christians) to knowingly join a site with any connections to an organisation that ran adult sites.

American Christians sites have found it harder to reach UK audiences. While many American Christians live within a Christian culture, consume Christian media, most UK Christians do not. There aren’t enough of them and it is not their choice. They follow mainstream culture and have to juggle their faith with living in a contemporary society that has very different values and behaviour. Relationships are integral to this different. Most of our members, for example, say they would not contemplate sex before marriage.

We work to maintain the centre ground with a site that functions to a high technological level but but also can keep close to the customer.

We have been involved from the start with the Online Dating Association, which begun in the early stages nearly two years ago. From our experience, we understand the importance of upholding trust and high standards for our members. We believe these should be applied across the dating industry as a whole. That is certainly going to be a challenge, but for the industry to survive and thrive and serve its millions, that is essential.