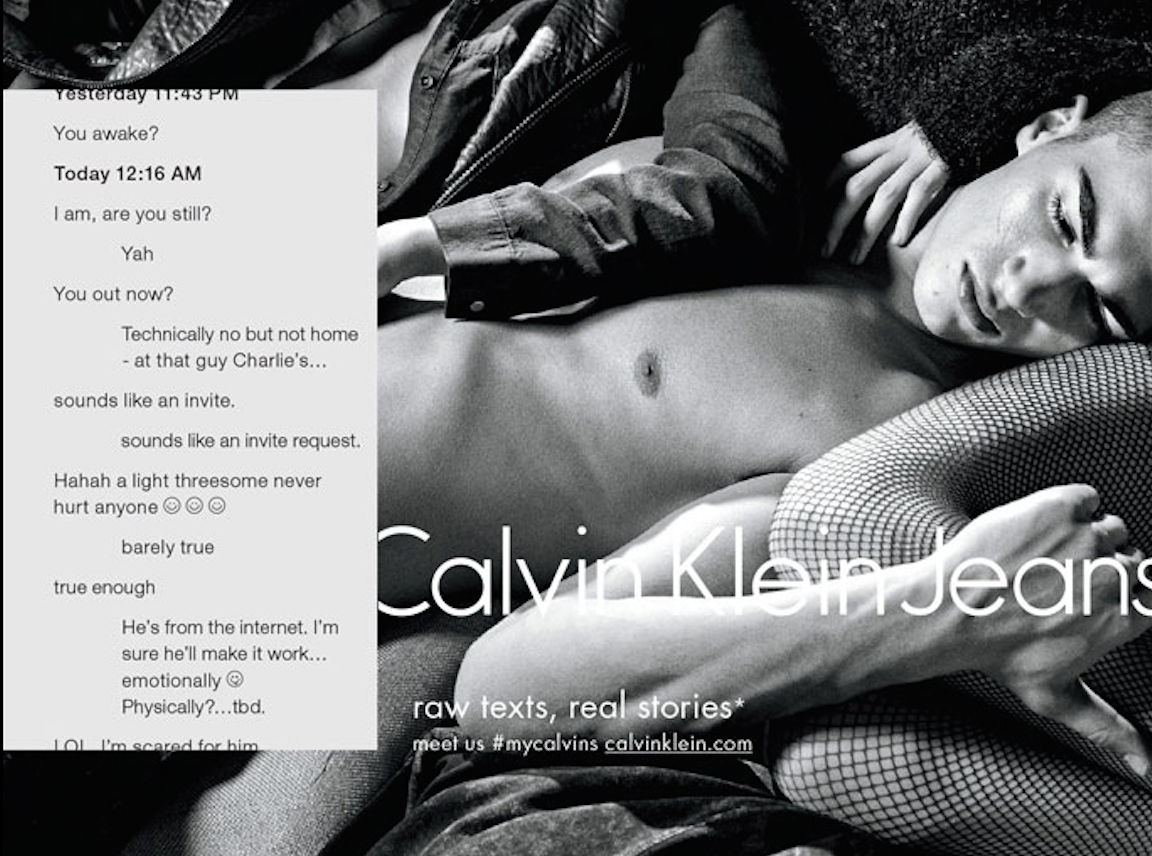 Calvin Klein has embraced the world of sexting and Tinder with its experimental new ad campaign, which will appear on the dating app later this year.

The Fall 2015 #mycalvins campaign intersperses shots of models with printed stories of “love, lust and sexual desire” inspired by sexts and messages sent by real people.

Using the tagline “raw texts, real stories”, the excerpts are “inspired by actual events and people” and sees Calvin Klein pay tribute to a new form of tech-based flirtation.

She said the campaign is about “highlighting the truth about dating–the meetup, the hookup and the freedom that you have through the digital dating landscape and how instantaneous it is.”

The stories and texts come from the experiences of young adults in London, New York, Sao Paulo and Seoul.

The ads were created by Mother New York and shot by Mario Sorrenti, and were the result of the ad agency hanging out with “kids living in today’s world” and hearing their stories about sexting, hookups and digital dating.

And considering that the ads were inspired by the popularity of apps like Tinder and Snapchat, the #mycalvins campaign will actually run on dating app Tinder later this year.

Tinder started including in-app advertising earlier this year – opening its ad platform with a Bud Light video – and this fall the Calvin Klein campaign will be beamed around the world to Tinder’s singles.

The collaboration is an integrated digital partnership, and will see Calvin Klein profiles added to Tinder that singles can swipe left or right.

Earlier in the year, Tinder co-founder Sean Rad said engagement for these types of profiles was normally around 25%, although the Bud Light video saw an incredibly increased rate of engagement.

Tinder has heavily ramped up its promotional side this year, selling discounted music, a week on a Croation yacht, along with a Gillette data partnership, Expedia study and an advert with crisp company Lay’s.

The Tinder and Calvin Klein partnership will begin this fall, check out the full adverts below: