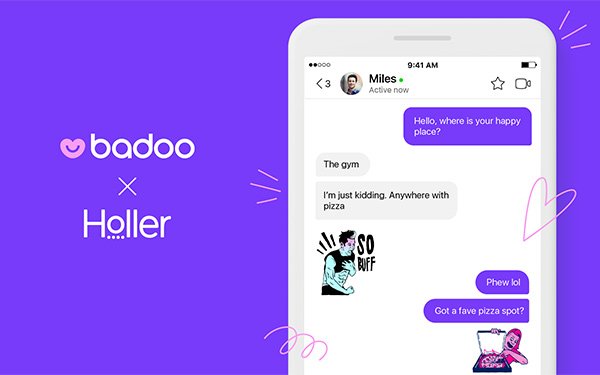 Badoo has teamed up with Holler, a creative content studio that provides apps with animated stickers to help their users keep the conversation flowing. The partnership has seen the tech company’s specialist product integrated into Badoo’s keyboard.

Formerly branded as Emogi, Holler automatically suggests potential visuals that could be used in an interaction, whereas other similar products require users to enter specific search terms.

It currently operates in nearly 50 languages and is already available on dating apps PlentyOfFish and Hot Or Not, as well as iMessage, LinkedIn and Twitch. A global network of content moderators correctly tag the stickers and make sure they are relevant for dating cultures around the world.

In initial pilot testing, Badoo found that users have been interacting with each other more following the new introduction.

The dating app is planning to collect data about which stickers are most popular so they can inform singles about graphics that get the best response rate.

Badoo CMO Dominic Gallello said to MediaPost: “[Holler provides] tools to our users to better express who they are and form relationships through our product – Words can only say so much.”

When Gallello first joined the dating company he oversaw a major rebrand and the introduction of a new tagline, “Date Honestly”. This encourages people to be completely open about their personality to help them find a perfect partner.