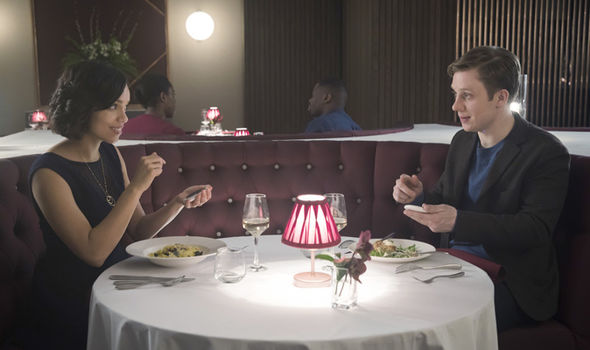 Season four of Black Mirror has just begun, and the online dating episode has aired on Netflix.

The episode, called ‘Hang the DJ’, saw single people use a ‘system’ to find their perfect match.

The on-screen hopefuls went on their first date, where they were told by the system that their date would expire in 12 hours.

Frank and Amy were then made to go on a number of dates with other singles by the system, as it tried to build up their profile of romantic statistics.

When the two were paired together again, they made a pact and told each other they wouldn’t check when their time would be up. However, Frank couldn’t avoid the temptation and checked, which led their relationship to go from five years to 20 hours.

This led to Frank and Amy parting ways and dating other people, though nothing compared to their short term bond.

The system told the pair that it would pair them up with their most compatible partner on ‘pairing day’, but they were allowed to date one more person before the day arrived. Amy and Frank both chose each other.

They decided to escape from the system and climb over the wall to be with each other, but it turned out they were both inside a simulated app. They had escaped 998 times before this, out of 1,000 simulations – meaning in only two of the simulations they didn’t rebel.

The scene finally reverts back to the real world and watches Amy and Frank meeting for the first time in a pub, showing them looking at a dating app with a 99.8% compatibility rate.

The couple ended up living happily ever after.