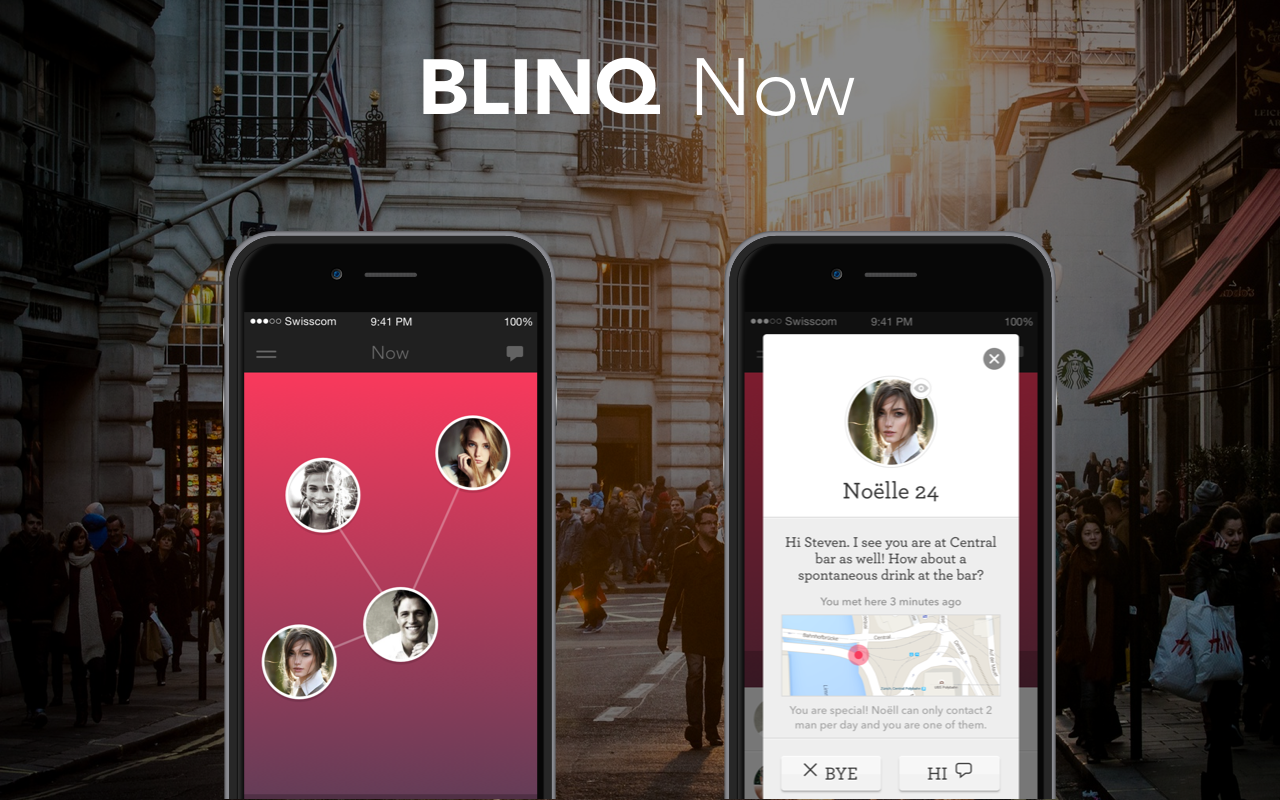 Swiss dating startup Blinq has unveiled its second main feature, which uses innovative proximity technology to alert its users when a potential match is nearby.

After two months of development, the Zurich-based dating app launched “Blinq Now”, a new feature designed to help users discover other singles who are located within 50 metres from them.

Instead of using the same beacon proximity technology it used to installed its Estimote Beacons last September, Blinq teamed up with fellow Swiss startup Uepaa to build its latest feature.

Founded in January 2012 by Mathias Haussmann and Franck Legendre, Ueppa is a peer-to-peer (P2P) communication technology provider for mobile devices, which gives app developers the ability to integrate nearby smartphone-to-smartphone discovery into their service.

Last year, the startup launched its proximity SDK, in an effort to revolutionise the way people interact and discover each other while in proximity.

Using this technology, Blinq’s Now feature allows its users to use their smartphone’s Bluetooth technology to scan the surrounding area for potential dates at any given time, without the need for GPS signal.

Once a user activates their Bluetooth and enters Blinq, the app will begin searching for other nearby users who meet the criteria for their ideal partner.

When the app detects a potential date, their profile picture is added to the app’s Now interface and the user is notified, giving the requesting user the option to view their profile and send a “Now” message.

According to the app, every user will be able to send one Now message each day, with those paying for premium subscriptions being able to send as many as five.

Once a users send a Now message, their potential date will receive a push notification directing them to the request on the app.

Using Blinq’s Tinder-style swiping mechanism, the receiving user can then respond with a “Hi” or “Bye”, depending on whether or not they are interested.

Should they choose to say “Hi”, the app will instantly match the two users, opening up a chat interface leading on from the initial message.


Speaking about the new feature, the app’s co-founder Alex Zimmermann told GDI: “The feature can be used to find singles in a bar, in the train, at a festival or many other locations. It even works accurately indoors when there is no GPS available.

“We expect users to check BLINQ when they enter a club or bar or when they are commuting on the public transport.”

And when asked about the advantages of using both iBeacon technology and Ueppa’s SDK on the platform, he said: “Beacon and P2P technology complement each other. We have now a network with over 300 beacons at bars, clubs, malls, etc.

“We use the beacon location data to improve the profile suggestions and speed up the meeting process of two users.

“It also helps us to generate additional ad revenues since we can target advertising campaigns with an accuracy that no one else can.

“P2P makes the whole process scalable without the need to build up an international beacon network by ourselves.”

He added: “Due to our close partnership with the P2P technology provider Uepaa, we are the first dating app to roll out such a feature on a large scale.

“The time has passed where apps have to do power draining continuous GPS updates in the background.”

Blinq Now is available to use on its iOS platform, but is yet to be launched for users with Android devices.

In terms of making further developments to the platform, Zimmerman confirmed is currently in the process of exploring other technologies which could allow the app to increase its search radius to up to 400 metres.

The company is also planning to integrate the functionality of its recent HowHot campaign into the BLINQ app, meaning that algorithm will automatically select the best performing profile images for its users.