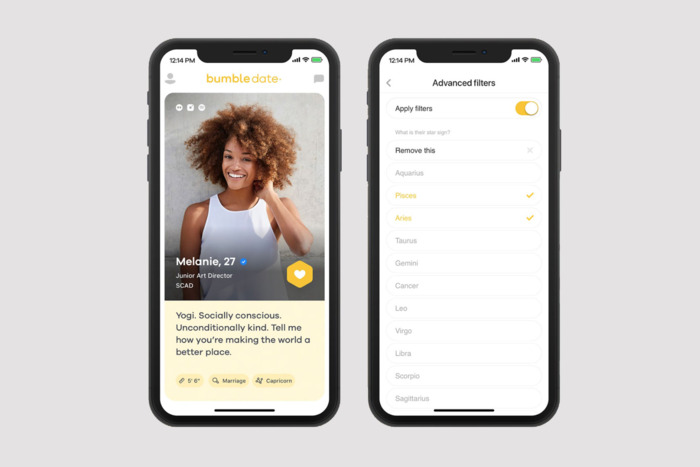 Bumble has announced a series of filters, two of which will be available for free, on its Date, BFF and Bizz networks. Using three or more filters will require a purchase.

On Bumble Date, the options are to filter by height, religion, star sign, education, politics, smoking, drinking, exercise habits and the reason why you use Bumble.

“Whether you’re looking for a new job in media, a new mom friend or a date with a Sagittarius who loves live music, Bumble Filters enable you to tailor your experience,” said Alexandra Williamson, Bumble’s chief of brand.

Madison Malone Kircher, writing for Intelligencer, argues that some of the filters may not have been thought through.

She writes: “The religion choices are limited to agnostic, atheist, Buddhist, Christian, and Hindu; Jewish stands out among the many omitted options.”

The four options for commitment are reportedly marriage, a relationship, casual and “don’t know yet”. Kircher says this is reductionist, and some users may want to make polyamorous connections.

Last week, Bumble began sharing roundup stats on its social media feeds. In just four years, the app has gone from having four employees to 100.

The company now has eight international teams, having just launched in India with the help of actress Priyanka Chopra.

An IPO is said to be in the works for the female-first platform. In November, a Synovus Trust analyst put the potential value of a listing at over $1 billion.