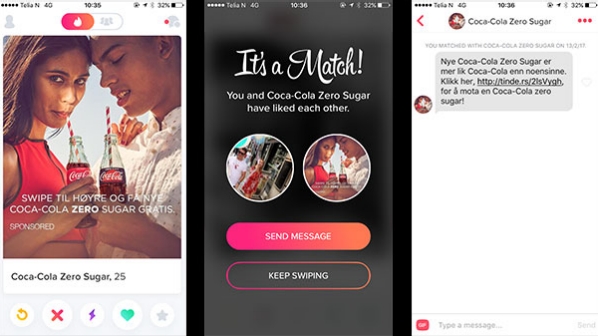 Coca-Cola recently gave away free bottles of Coke Zero to singles in Norway with a new partnership with Tinder.

Coca-Cola’s Norway team hooked up with Tinder to create a set of branded profiles for Coca-Cola Zero Sugar on the dating app.

If singles swiped right on the branded profiles, they matched with Coca-Cola and were sent a coupon for a free 500ml bottle of Coca-Cola Zero Sugar.

According to the drinks conglomerate, the campaign generated over 218,000 impressions, and had an engagement rate of 14.3% – significantly higher than the normal rate of 8%.

In addition to this, more than 40% of Tinder users in Norway clicked through, which is six times higher than the average click-through rate, the company said.

In total, Coca-Cola ended up issuing 22,000 digital coupons for free bottles of Coca-Cola Zero – over half of which were redeemed for a free bottle. Speaking about the campaign, Karen Huffman, general manager at Coca-Cola Norway said: “We are proud of the team for this brave innovative move, which generated such impressive redemption rates.

“The team has once again shown that it can come up with relevant activations that truly connect our target audience, getting our new Coca-Cola Zero Sugar into the hands of countless consumers.”