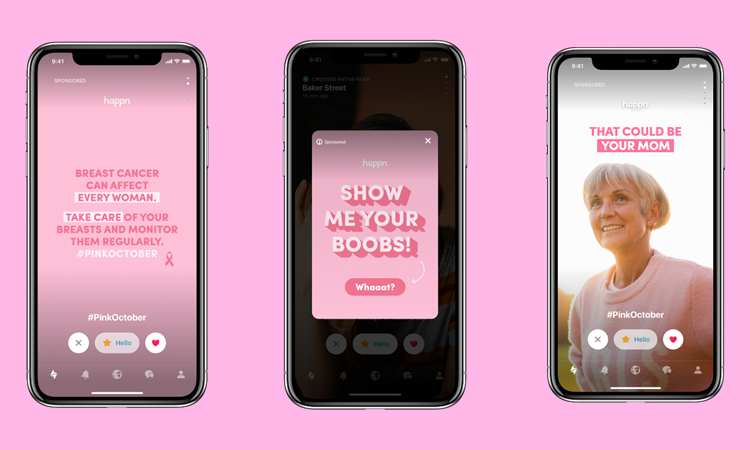 Every year, Pink October is recognised around the world, and throughout the month major cancer charities encourage people to check themselves and stay on top of their health.

The dating app is taking part this year by introducing a variety of surprising messages, that will appear while users are scrolling through the profiles of potential matches. For example, one pop-up card for women reads “SHOW ME YOUR BOOBS!” to grab their attention.

It then goes on to explain that while this isn’t the best pickup line for online dating, it could help to save somebody’s life. Women are told to take care of their breasts and check them regularly for any abnormalities.

Men will also be shown messages asking them to take care of the women in their life, by catching up with their mum, sisters and friends, to make sure they are keeping track of their health.

Marine Ravinet, Head of Trends at happn, said in a statement: “Despite the many scientific advances in recent years, we must remain mobilised in the fight against breast cancer. Our in-app messages are there to invite our users of all ages to take control of their health.

“However, this month does not only concern women. It is important to also educate our male users so that they encourage their loved ones to be screened regularly.”

happn partnered with RED ahead of AIDS Awareness Month in December 2019, to help join the fight against HIV/AIDS in eight of the worst-affected African countries.