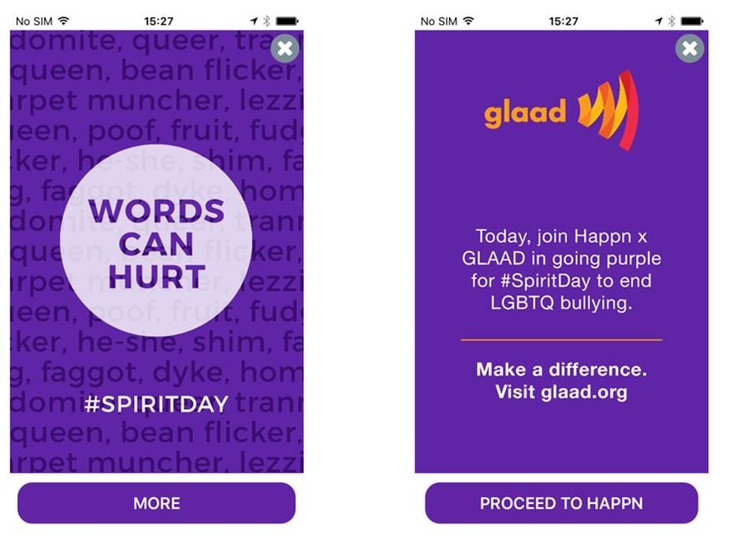 Happn has teamed up with LGBTQ media advocacy organisation GLAAD to create a brand new campaign aimed at encouraging users to stand up to LGBTQ bullying.

Having realised that as many as 74% of students have reported feeling victimised by their peers in the last year, Happn decided to take action by launching a brand new LGBTQ bullying awareness initiative yesterday.

The campaign consists of a full-screen pop-up that now appears on the app, which normally shows users the people they’ve crossed paths with in real life.

The purple pop-up reads “Words Can Hurt” over a background of some of the insults and comments that many LGBTQ individuals face on a daily basis.

And if users decide to click “more”, they are taken to a second screen that explains a little more about the campaign and encourages users to take action.

If they do, they can choose to “Go Purple” and use GLAAD’s mobile app to alter their Happn profile picture with a specific purple filter.

Alternatively, users can also opt to take part in the movement on social media or make a donation to help GLAAD with its work boosting acceptance of the LGBTQ community. Happn CEO and co-founder Didier Rappaport said: “We choose words carefully in portraying ourselves in order to charm others when filling out our dating profiles.

“If only we could be equally as mindful of the derogatory words used towards the LGBTQ community.

“To show our support for the GLAAD youth-driven cause, Happn is leveraging its platform to raise awareness, and challenging its users to rewrite the script for LGBTQ acceptance in America and across the globe.”

The #SpiritDay campaign originated from the work of Brittany McMillan, who saw a series of Tumblr posts about the suicides of LGBTQ teens and started a movement, asking people to wear purple – the colour representing spirit on the LGBTQ Pride Flag.

The day is now an annual event that takes place every year on the third Thursday in October, and this year has seen huge support from celebrities and public figures, as well as The White House.