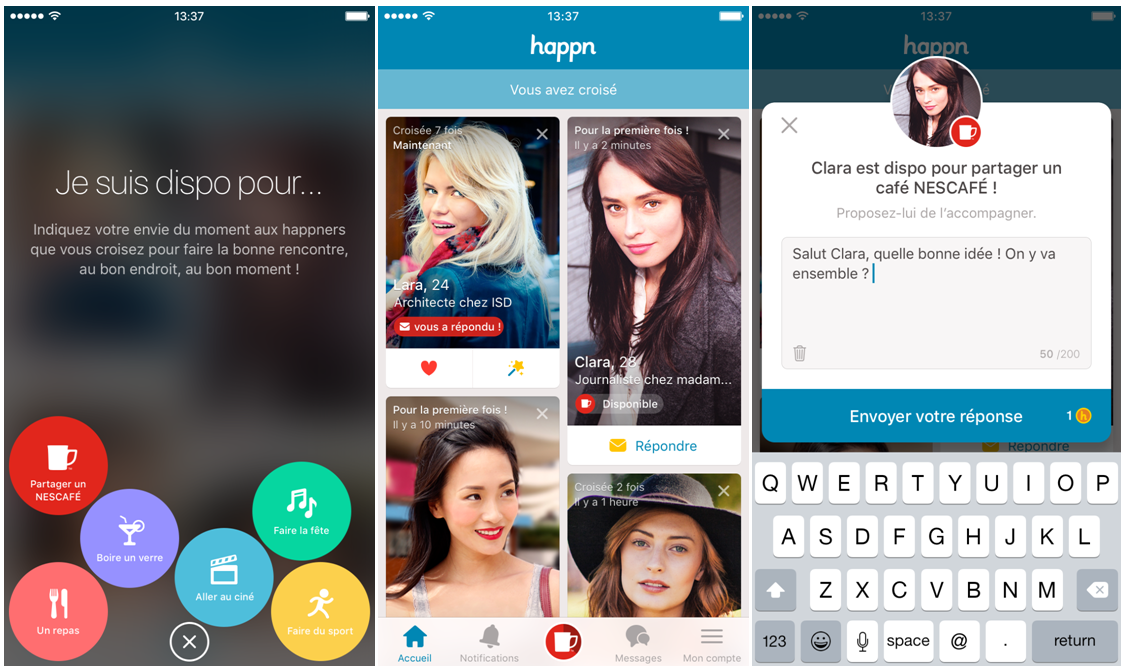 Following the launch of its offline feature See You There last year, Happn ran an interesting campaign with Nescafé to bring singles together for coffee dates.

Released in May, See You There lets users of Happn arrange real life encounters with people they match with on the app.

When you click the + button at the bottom of the home screen, an area opens up with a message reading: “Let the happeners you cross paths with know what you feel like doing – and meet the right person, at the right time, at the right place!”

On the screen are a number of bubbles, each representing a different activity, such as “Go for a walk”, “Get a drink”, “Go out”, “Grab a bite”, “Go for a run” or “Catch a movie”. When you click one of these activities, the app broadcasts that you are available for that activity over the next few hours, and if any of your matches want to join you, they simply message and say they are interested.

When it launched last year, Happn founder Didier Rappaport said it was designed to be a “seamless integration to allow people to meet as they would on any given day — during regular daily activities — whether at a party, at work or at the gym.”

And as part of the promotion of the offline feature, Happn created a partnership with Nescafé to connect people for offline coffee dates.

On the weekend of 8th October, Happn added a new activity to the See You There feature – a bubble that said “Share a Nescafé”.

When users clicked the button, they could broadcast to other users of the app that they were available to meet for a coffee. In addition to this, Happn users could enter a competition on Facebook to have a date in a hot air balloon courtesy of Nescafé.

The promotion ran for 36 hours over the October weekend, during which the + button became a red coffee mug, and over 250,000 Happn users were exposed to the campaign.

This week, Tinder released details of a recent collaboration with Ford where singles could win a blind date in a Mustang – a campaign that was interacted with by 1.5m users.