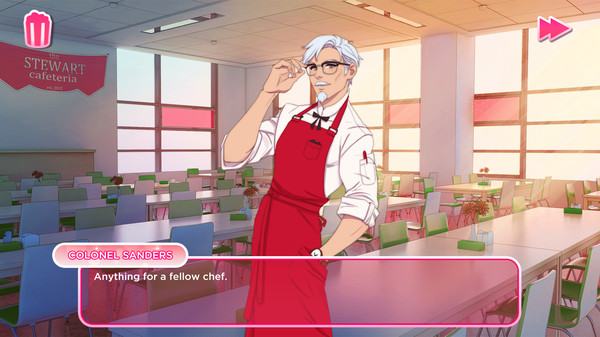 Fast food restaurant KFC is due to launch a dating simulator that will see players attempt to start an intimate relationship with Colonel Sanders.

The PC game is titled ‘I Love You, Colonel Sanders! A Finger Lickin’ Good Dating Simulator’ and is produced in a Japanese anime-style. The storyline follows a cooking apprentice who is competing to become the founder’s new business associate, as well as his romantic partner.

Officially produced by KFC developers, it is listed on video game distribution platform Steam and scheduled to be released on 24th September for free.

Some of the features mentioned in the description include a secret ending, secret recipes and a number of different cooking battles.

Ali Jones from PCGamesN said: “With a potential lifetime of free chicken as your romantic reward, Colonel Sanders promises to be a friend with an awful lot of benefits.”

It was designed to highlight some of the flaws in the matching algorithms used by mainstream dating apps. After a certain number of swipes, information pops up on the screen and informs users how their decisions are impacting which profiles they are shown in the future.

Burger King Brazil ran a promotion on Tinder in January after a song about a man who used the dating app for casual relationships gained significant traction.