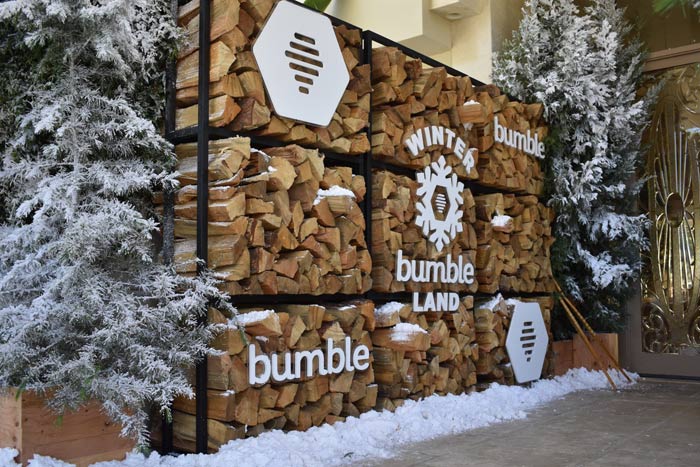 Online dating platforms like Bumble, OkCupid and Tinder are introducing or expanding their presence at events to help encourage more face-to-face matchmaking. Typical events include food-based socialising and music festivals.

One example of this was OkCupid’s first major sponsorship with this year’s Pitchfork Music Festival in July.

The partnership included a badge appearing on users’ profiles to indicate they had arrived at the festival, a Polaroid pop-up and a “Feel Good Tent” where users could meet up, take photos and answer questions.

Bernadette Libonate, OkCupid’s senior marketing manager, said that its users are typically “creative, down-to-earth” types with strong interests in music, food, and art. They meshed in well with the demographic of the music festival, which boasts a “multicultural, substantive” crowd.

At this year’s Coachella, Bumble created a snow-filled “Winter Bumbleland” in the desert (above image). It was hosted by Kendall Jenner, Kylie Jenner and Ashley Graham and featured an ice bar, snow angel garden, glacier pool, winter tubing and much more.

Bumble also arranged branded busses to pick up guests in the area. Bumble’s Director of Marketing Chelsea Maclin said: “We knew many of our users attend and are interested in Coachella and wanted to provide them with a unique, creative, and positive experience.”

Finally, Tinder recently partnered with Delta Air Lines to produce a series of painted walls depicting various places the airline flies to, encouraging passing pedestrians to take selfies in front of them. The backdrops aimed to provide users with new profile pictures.

The wall, which was part of Delta’s “New York Is Go” campaign celebrating its New York travellers, was located throughout the summer on Wythe Avenue in Williamsburg, Brooklyn.

William Betz, general manager of brand communications for Delta Air Lines, said: “Dating apps have become an integral part of dating in New York, and we were inspired to create this campaign by a common theme we found among New Yorkers’ online profiles: travel. Given Tinder‘s popularity, they were a natural partner to work with to create a compelling way for consumers to engage with Delta.”

Delta and Tinder also hosted a singles-centric event, where guests were able to get their photos taken by a professional photographer to enhance their profiles on the app.