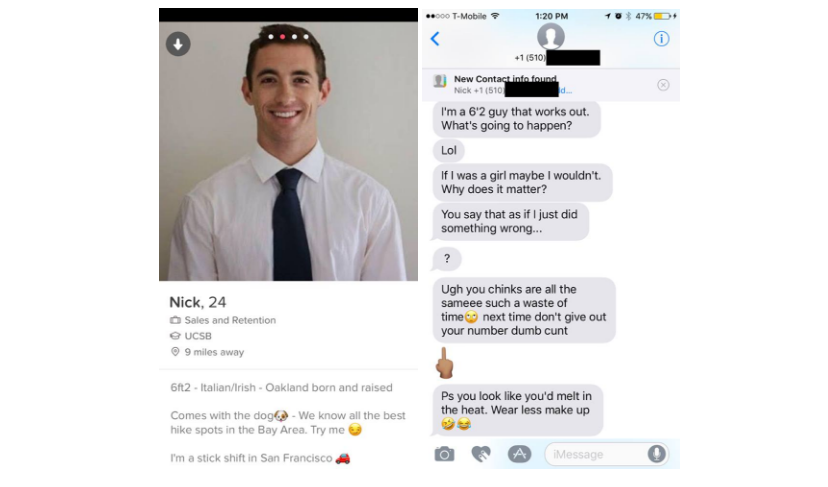 An American man has been banned from Tinder after he sent racist and sexist messages to a woman he met on the dating app.

Nick’s actions were called out by someone who met him at university called Kevin Tran.

The post explains that the Tinder user matched with one of Tran’s friends on Tinder, but when she didn’t reply he began sending her abusive, racist messages. He goes on to say that he asked Nick to explain the messages, but he denied them and blocked Tran on social media.

Tran writes: “The intent behind this post was to expose Nick for who he is, a racist misogynist. Since posting this, several women have revealed their own encounters with him and others like him.

“We don’t have to put up with this. We have to protect each other by calling these people out, even/especially if they are your friend, and showing that this behaviour will not be tolerated and will never be acceptable. #nomorehiding”

It was later announced on the same post that Nick allegedly had previous convictions of abuse, which are said to include “harassment, assault, and emotional abuse”, and he was asked to undergo therapy.

And in an official post on its blog, dating app Tinder announced it had banned the user, with VP of Communications & Branding Rosette Pambakian speaking about the company’s lack of tolerance for this sort of behaviour:

“I was personally offended by what you said. Your words to that woman were an assault, not only on her, but on all of us. Every day, we work to rid our ecosystem of bad actors like you.

“Why anyone would choose to go out into the world and spread hate I will never understand, but you do not have that choice on Tinder. Hate is not an option and we will continue to fight it wherever it rears its ugly head.

“You have a lot to learn, Nick. I see that you studied global business, and that you joined your school’s programs for young entrepreneurs and technology management.

“Great choices. Because you’ll need to search far and wide to find an organization that will employ you now. Not sure if you’ve heard, but more and more women are becoming successful entrepreneurs and business leaders.

“Clearly, you haven’t been paying attention. Women’s voices are only getting louder. So let me say this loud and clear: you and your kind are not welcome in our world.”